Can not be carried

12.7x108mm ammunition is a rarely used but extremely powerful ammo type. It is extremely rare thus is the most prized round in the Metro. They were originally created before the Great War of 2013 as ammunition for machine guns, such as the DShK 12.7mm Machinegun, or high powered sniper rifles, such as the Clapper, but has seen even greater use after the apocalypse in makeshift guns such as the Preved and the Gatling.

After World War III, many DShKs were brought to the metro along with stocks of their ammo, the 12.7x108mm round, for defensive reasons, especially after the discovery of the new mutated creatures outside. The large amount of DShKs in pre-apocalypse Russia meant that many were used as primary weapons by Metro dwellers in the early days after the war. In fact, during Metro 2033, if one has a sharp eye, many spent 12.7x108mm rounds can be seen lying on the floor of the Metro, showing how much they were used in the early days of the Metro. However, as it became clear that they would not be rescued and could not leave the Metro, it was obvious that supplies of the valuable ammunition would run out, so they were rationed. By 2033, this ammo is mainly seen in shops, or strung on ammunition belts for DShKs defending checkpoints.

As the mutants began finding ways into the stations, the round again began being used as ammunition as opposed to currency, and they were soon used inside the DShKs they were made for. Because of its sharp rise in usage up to 2033, this ammo is now the one of the rarest type in the metro; this is why they can never be spent, nor bought. Some 12.7x108mm rounds are seen in shops, but Artyom cannot buy them. The 12.7x108mm round is the only conventional cartridge in Metro: Last Light that cannot be bought. However, in the Redux version of Metro: Last Light they can be purchased in the Depot level as "Heavy Rifle Cartridges".

Artyom can utilize this ammunition in DShKs, but they only ever have around 50 rounds at most because the supply is spread so thinly, although this is enough ammo to dispatch a horde of nosalises, Nazis, or whatever may be on the business end of your mounted machine gun. Although the ammo (and the gun) are extremely rare now, they are used to devastating effect.

He can also use the ammunition inside weapons such as the Preved sniper rifle, that has a much lower rate of fire than the DShK, and therefore is less costly on the ammunition. The round maintains its power in the rifle and is more than capable of taking out men and mutants in one shot, even heavily armoured troopers. Artyom also uses it during the Battle for D6, inside the Gatling, that contains 500 rounds, likely the majority of the Ranger's stockpile of the round. However, the rounds are used to great effect against the Red Line heavy troopers and the armoured flamethrower trooper and his riot shield guard. The round for the Gatling and Preved are basically the same type, but non-interchangeable between them for gameplay reasons.

Finally, the rounds are used in the only known Clapper in the Metro, given only to the Red Line's most skilled Sniper. Once again, the round proves its power as it kills numerous Reich troopers in one shot. The Nazis also appear to use this ammo, as more rounds are found throughout the sniper's mission, though most of the Nazis there does not carry weapons capable of using them. They can be as alternative way of payment as MGRs are rare.

DShK heavy machine gun with 12.7x108mm ammo box mounted on its left side.

Untradeable ammo belts of 12.7x108mm ammunition found at some vendors. 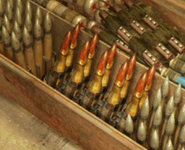