Originally available as a limited edition bonus for Metro: Last Light, and since added to Metro 2033 Redux, the AKS-74U, known in-game simply as the AKSU, is a compact version of the Kalash. Designed for close-quarters combat, it is perfect for the Metro's claustrophobic environments. However, the AKSU is exclusive to Ranger Mode in both games.

It is available at the D6 armory for free in Last Light and at the Defense guns merchant in 2033 Redux. It can also be equipped in a Shooting Gallery if the Developer Pack is launched on Ranger difficulty.

Like its parent rifle, the Kalash (AK-74M), the AKSU fires a 5.45x39mm cartridge. Due to its shorter barrel length, it has a reduced range and accuracy compared to the regular AK-74M. The AKSU makes up for its shortcomings with a slightly higher rate-of-fire and a faster aim-down-sights time - making it an effective emergency weapon when facing enemies at close-range. When loaded with Military Grade Rounds, this weapon is capable of killing many types of enemies with one shot.

Recoil is also moderately more noticeable with the AKS-74U, making the weapon harder to aim, so it is recommended that a red dot sight or laser sight be attached to the weapon for easier target acquisition. Avoid full-auto fire if you cannot control its recoil, burst fire is a good way to maintain accuracy. With no HUD and crosshair, Laser sight becomes important if the player needs to fire from the hip.

A suppressor may also be added to decrease recoil, but bear in mind that it will further decrease range as well. Due to the nature of this weapon, it may not be practical for Ranger Mode, mainly because of its inaccuracy and increased fire rate, making it expensive to fire fully automatic, especially with ammo being scarce. Despite the weapon only made available in Ranger mode, carrying it is only advised indoors and slower, more accurate weapons will serve the wielder better when they reach the surface.

The AKSU has the same set of upgrades as the Kalash, so it has threeattachment slots and six available attachments in total. Attachments in the Misc slot can be equipped both at once, so the AKSU can have four different attachments at the same time. 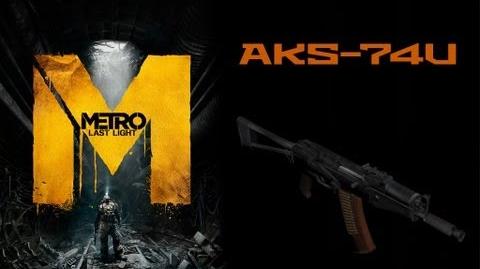 In-game AKSU, as seen from the first-person perspective in Metro: Last Light.

Equipping the AKSU at the Shooting Gallery.

Hansa guard armed with the AKSU.