Alexander "Alex" Sukhoi (Russian: Александр Сухой) is Artyom's adoptive father and mentor. He is one of the authorities in Exhibition and head of the station in Metro 2035.

Alex is responsible for saving Artyom during the nuclear war, as stated in the game; "I was just a boy when they saved me". In the novel, however, while Artyom is still a baby, his mother hands him over to Sukhoi while their home station is being attacked by a horde of rats. Sukhoi and some others manage to escape via railcar, but everyone else still in the station was killed. Despite this, Artyom doesn't refer to Alex/Sukhoi as "father" but as "uncle". In the novel Sukhoi is not married or in any relationship, to which Artyom considers him "the old metro wolf". It may be because of this that he is depicted as getting nervous upon seeing a mother and a child, since he never got married or had kids himself. Instead he wanted himself to be a good father figure for Artyom, who he thought should have the future he could never have. At the end of the novel, Sukhoi was in charge of the survivors at VDNKh.

Alex only makes a few brief appearances in the game; Artyom fights alongside him and Hunter against a horde of nosalises at the gates of Exhibition Station. Also, there is an optional encounter in his office before Artyom leaves the station, nearing the end of the level "Exhibition". Talking to him the second time before leaving Exhibition awards positive morality points. He is protective of Artyom and is unhappy with Artyom leaving Exhibition to go to Riga. As one of the leaders of Exhibition, it is his responsibility to ensure that the station survives. How he came to be one of these authorities is unknown, but it's generally implied that Alex was elected as he is popular among most of Exhibition's citizens.

Alex's office (notice the poster of the Metro 2033 books just behind him). 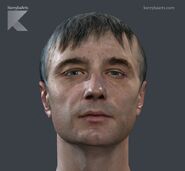 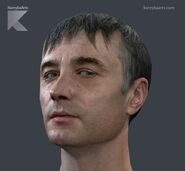