Metro Wiki
Register
Don't have an account?
Sign In
Advertisement
in: Metro Exodus, Characters, The Rangers, Crew of the Aurora
English

Alyosha (Russian: Алёша) is a character who first appears in Metro Exodus. Specializing as a scout, he is a Spartan Ranger who joins Artyom's crew aboard the Aurora armoured train.

A Ranger of the Sparta Order, after the Battle for D6 Alyosha was one of the few brave men who joined Artyom, Anna, Miller, Stepan, Duke, Tokarev, and several others on the journey eastwards across the Russian wilderness.

Alyosha spent several years working as a guard in Polis, but eventually he decided to leave and joined the Rangers in search of new adventures. Since he specializes as a scout, few in the Order can match Alyosha's expertise when it comes to survival in the irradiated ruins of post-apocalyptic Moscow.

As Alyosha is always looking for excitement, he is overjoyed about the journey aboard the Aurora and sees it as yet another adventure. He is also a shameless flirt and fancies himself something of a ladies' man, claiming that girls find him "irresistible".

Alyosha joins Miller and the rest of the Rangers in escaping from Moscow with Artyom and Anna. When they are intercepted by the Hanza armored train, Alyosha is shot when it opens fire, but makes a full recovery.

Alyosha has a more prominent role in the Taiga level, where he accompanies Artyom in scouting the Valley. Unfortunately, they are soon separated when their railcar is derailed by a landslide and falls into the river below. Alyosha is captured by the Children of the Forest, and immediately falls in love with Olga. As the Children are debating what to do with him, Alyosha manages to escape with Olga's help. Alyosha and Artyom are reunited towards the end of the level, where Alyosha shows him the reason the Valley wasn't contaminated; a large dam blocking off millions of tons of radioactive sediment. Unfortunately, as Alyosha points out, the dam is already leaking and will soon collapse, spelling doom for the Valley. They are soon attacked by the Forest Master, and Alyosha saves Artyom by throwing a Molotov cocktail at it. Unfortunately, the bear also attacks Alyosha, forcing Artyom to fight the bear alone. After the bear falls off a cliff, Alyosha helps Artyom up, and the two are soon joined by Olga and a few Children. If Artyom avoided killing the Children, Olga will return Alyosha's feelings, and Alyosha vows to come back for her. He also warns her that the dam is about to collapse and to evacuate the Children before it does. He and Artyom will then safely zipline towards the Aurora. If Artyom kills too many Children, however, Olga will call Artyom a murderer and Alyosha a liar, and warn him that he will be killed if he comes back. The two will come under fire from the Children as they are ziplining away, and Alyosha will be shot by an arrow. This will have further implications in the later game, since Alyosha won't have enough blood to give to Artyom. Alyosha will also be confined to a wheelchair.

Alyosha can briefly be seen at the beginning of Sam's Story DLC. In it, he is shown standing without difficulty. Whether this means that the good ending of the Taiga level is canon, or that Alyosha simply got better is unknown. 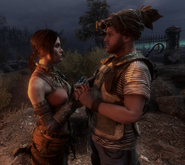