This is the article page for ammunition. For related articles please refer to the category page. 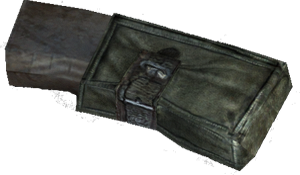 Ammunition is the term given to any item that can be used by a ranged weapon, usually a firearm. Ammunition is commonly found in clips, cylindrical casings that hold cartridges (classically 6), or magazines, cartridges stacked in a line covered by a casing. Ammunition in the Metro can vary from simple ball bearings to high caliber sniper-rifle ammo. Ammunition in Metro 2033 is used in long range combat to kill enemies.

In the Moscow Metro, pre-war military grade 5.45x39mm rounds, or MGR, ammunition is used as currency as not only have not enough bills and coins lasted since the nuclear devastation, but when metro inhabitants are in need they can use it as ammunition itself, though this does result in the person literally "shooting money". Furthermore, they are impossible to replicate to match pre-war standards, so counterfeiting is difficult. Ammunition is uncommon and is usually found on dead humans or in caches scattered through the game, but Artyom can also gain ammunition by exchanging ammo types that they have for others at exchange kiosks for a service fee.

The following are all ammunition types in the Metro games and their availability in individual titles.

The following table shows the exchange rate between military grade rounds and other types of ammunition. The Buying column (in the format x : y) tells you that you will receive y shells of the desired type for paying x MGRs. The Selling column tells you that you need to sell y shells to receive one MGR round.

In Metro Exodus, ammunition can no longer be bought, as neither MGRs, nor traders are present. It's possible, however, to find it in the game world, or craft at a workbench using any mechanical and chemical materials acquired. In the field, when using the backpack, only ball bearings and bolts can be crafted, but when using a workbench, it is possible to craft all ammunition types. Any ammunition previously collected or crafted can be scrapped for additional materials. Scrapping only yields a fraction of crafting materials back, but can still be helpful when low on resources and need to immediately craft medkits, filters, or different ammunition types.