Armor is a protective suit worn by Artyom. In Metro 2033, it comes in three different variants: Default, Stealth, and Heavy. In Metro Last Light the armour system has been considerably reworked. It returns in Metro Exodus, but has once again undergone fundamental changes to make the experience more customisable. 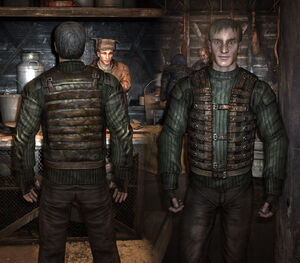 Artyom's default suit. It offers moderate protection from most enemies. It also allows Artyom to sneak better than in the heavy armor, but not as well as when using the stealth armor. Artyom will make noise unless he crouches.

The default armor acts as a middle ground between other suits. The upgraded suits, however, allow the player to choose which one they want based on play-style: guns blazing or silent and stealthy. 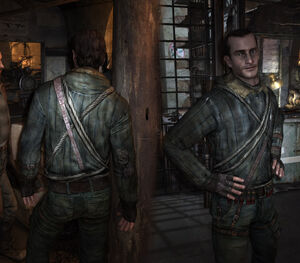 The stealth armor is fitted for those who prefer to go in silent and lurk in the shadows. While it does not offer much protection compared to the heavy armor, the benefit of using this armor is that it is much better at stealth; when in total darkness Artyom can move past everything from patrolling Nazis to a sleeping Black Librarian.

This armor will keep Artyom undetected in some situations when the rest of the suits cannot. The player may notice that the stealth meter on Artyom's watch will frequently show no light (which means invisibility to enemies). Moving at a normal pace is extremely quiet and footsteps produce little sound. Use silent weapons to maximize the effectiveness of this armor.

The stealth armor costs 100 Military-Grade rounds in Armory Station and as an added bonus Artyom gains the Night Vision Goggles with it. 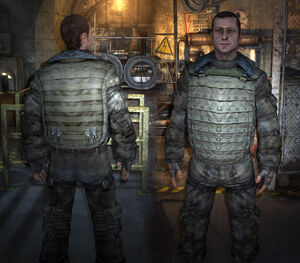 The heavy armor is fitted for those who prefer to take out their enemies face to face. It offers good protection, but it is not recommended for stealth since the added weight and gear produces noise. This armor is especially useful when fighting more powerful enemies such as the demon and the librarian. It is basically the core of Ranger armor and has the MOLLE system. Despite its weight, wearing it does not affect movement speed. If you have spare MGR, consider purchasing it at Polis as it helps in the last portion of the game.

The heavy armor costs 100 Military-Grade rounds in Armory and Polis.

Armor returns in Metro: Last Light, but not as a gameplay element, instead being mandatory pickups that Artyom has no choice over. 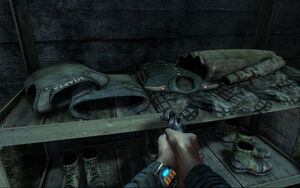 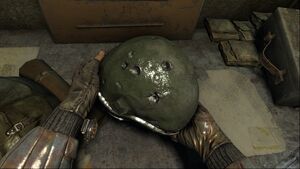 Artyom's starting attire appears to be the green sweater that looks and functions identically to the default suit from the previous game. He wears the hazard suit when going up to the surface during Ashes, but loses it after being captured by the Reich recon team. After making it through the Pavel level, he picks the Spartan attire from one of the lost groups at the end of the concentration camp level.

He briefly loses his equipment at the Bolshoi Theater level when he is captured and interrogated by the Reds. After Artyom escapes with the help of Leonid, he takes his weapons and ammunition back from the storage room at the start of Revolution.

It seems that the helmet he picks up was a part of the stolen Spartan suit since it doesn't appear to offer any additional tangible protection for the player. 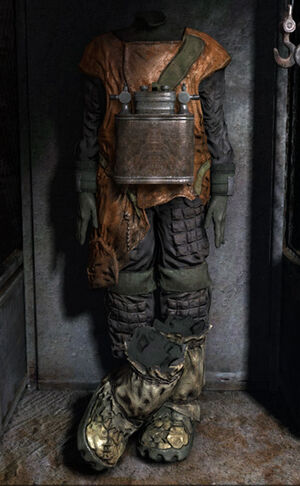 After navigating through the Venice storage area, Artyom is helped by station resident Simon. Simon guides Artyom to the swamp and gives him an NBC suit as a gift for helping deal with the bandits.The effect of this suit will allow Artyom to swim back up to surface from irradiated water without dying.

Its actual effects become clear in the Kshatriya mission in the Faction Pack DLC: when crossing outside areas without it, the radiation becomes immensely damaging. Besides the description saying it makes the filters last longer, it also makes most outdoor areas actually traversable at all. Alternatively the player might simply sprint across the irradiated areas, ignoring the NBC suit entirely.

Since it allows moving around the sleeping Librarians in the deep parts of the archives without waking them up, it is possible to avoid fighting them entirely if the player keeps the suit.

Anna, Simon, and many of the Reds wear this suit as well.

The full body portion of this suit only found in the campaign, mainly used by the reds is an actual suit used by the Russian Navy, a rebreather suit called the IDA59 Rebreather. Its also called the Monkey-Suit. in reality, it does not need filters since it gives the user a constant stream of Oxygen and exhales out Carbon dioxide without any machine help necessary. in reality it is not that radiation resistant, only allowing about 4-3 hours of rad exposure before it starts to break away, unlike a military NBC suit which can last a full week and a half before it starts to show damage (depending on how high the rad level is of course...) 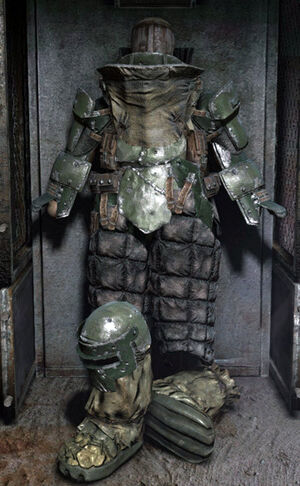 Before the final battle at D6, Artyom is geared up in heavy armor. Despite its enormous size and heavy plates of the suit, he is not slowed down by it. On easier difficulties it allows the player to shrug off some of the hits.

It reappears in the Kshatriya mission in the Faction Pack DLC. Being true to its description, it proves invaluable when fighting swarms of nosalises in the sewers, packs of watchers on the surface or the Librarians themselves.

Since it offers no protection against radiation, the player "in-character" should switch to the Hazard suit when venturing onto the surface and switching back when respective underground shortcuts are opened.

Two enemy bosses, one found in the battle of D6 with a flamethrower, and the other wielding a minigun in Heavy Squad, wear yet larger and heavier suits of armor. These suits allow their wearers to resist repeated shots from the Preved, Gatling, Hellsbreath, and explosives. 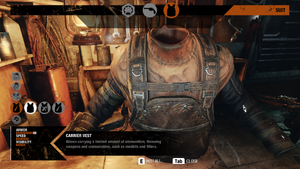 In the third instalment of the game series, armour returns, though once again the system has been altered extensively for a more varied experience. This time players can modify the armour worn by Artyom at workbenches, affecting its stats and that of other pieces of equipment, which can result in a number of different suits for different playstyles.

In Metro Exodus, the upgrades focus mainly on the carrying capacity of various items, with less attention given to actually upgrading armour protection or reducing visibility. Three out of four armour options provide +2 to the actual armour protection stat, with only the Consumables carrier providing no protection bonus. There is one upgrade for the gas mask/helmet which increases armour protection as well.

Throughout Artyom's travels, players will encounter numerous upgrades to their suit. These upgrades vary in usefulness and can be found throughout the game. 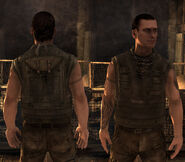 A Metro 2033 mod used to fix default armor during cutscenes in accordance with first-person view.

Same scene in the vanilla game for comparison.

Heavy armor sold in Armory station.
Add a photo to this gallery
Retrieved from "https://metrovideogame.fandom.com/wiki/Armor?oldid=80630"
Community content is available under CC-BY-SA unless otherwise noted.