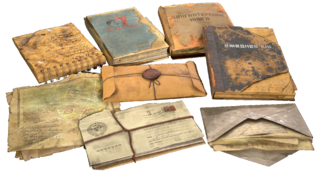 These are the journal entries of Artyom in Metro Exodus.

"When it has been years since anyone's heard anything but static and white noise on the radio, who could still believe we're not alone on this Earth?

My wife, my comrades from the Order, my friends, people from my station... nobody believes me. They are sure there's nothing on the radio, sure, that save for us, who hid in the Moscow Metro, there were no survivors of the Last War. We are alone on this planet, and in the Metro it's common knowledge.

But I did hear the call on the radio with my own ears! Yes, it was immediately drowned out by the static, but I had heard it! Which means that somewhere out there, under the skies, there is still a habitable place. We're not doomed to live the rest of our lives underground!

Still, nobody believes me..."

"We stopped a hundred klicks from Moscow to check our Geiger counters. The thing is, they are all in the green, as if they're in a conspiracy. Still, this amazing piece of news doesn't really impress anyone that much... The guys are confused as to what to do next, and I... I'm just waiting for answers. And hoping the commander, whom until recently I trusted implicitly, is going to be extremely persuasive in his reasoning."

"After all those years in the underground, the air on the surface seemed incredibly fresh, intoxicating... But this was not what had caused the crew's euphoria. Our journey finally got a definite purpose by the transmission from the Government bunker in the Urals.

For twenty years we thought that neither the Government nor military High Command had survived. Turns out they're still around... Where were they while we were eating each other alive in the Metro?

We'll have a lot of questions for them once we reach Yamantau... if we reach it. The ruins of our country are under enemy control according to Miller, and we'll have to fight through to our goal. A small team against the occupation armies... What are the chances that we'll succeed? That we'll get some answers?"

"It's the first settlement we've met so far. We need to find out who lives here, who shot at us and what's behind the bridge.

As usual, I'm going together with Anna... I'll have to watch out for her, too."

Escape from the Church by boat[]

"Looks like the Cult does have some muscle... These guys are probably no match for our weapons and training, but I should still try sparing them by aiming for a silent getaway.

And by the looks of it, I'd better get out fast. The best way to do it would be to use a boat I saw suspended from a gantry outside the church."

"I need to return to base to check if Katya and Nastya told Miller anything that could help us leave this place behind."

Get to the Port

"Our first contact with an extra-Moscow civilization is a complete failure. The local society abhors technology.

Katya and Nastya spoke fondly of another traveler who got stranded in these parts, Krest. He happens to be a mechanic, and Yermak will need all the help he can get if we are to restore the Aurora back to running condition anytime soon. The Colonel is ready to offer him a permanent position in our crew, and I sure hope he'll be inclined to accept."

Get back to the Aurora[]

"I finally met him. This Krest character seems to be a real adventurer and keen on joining our team, too. His technical expertise and knowledge of this world will definitely prove invaluable.

It's time to get back to the Aurora"

"Anna's gone off the grid! I know she can stand up for herself better than most of us, and I might be worrying over nothing... but I can't just continue as nothing happened when she might be in trouble. Of course, the local people and animals aren't much of a threat, but still...

Thank God, Anna is alive... I have to get her out of this bunker as soon as possible. She was breathing the poison air of this bunker all the time she was unconscious after her fall..."

"Luckily, Anna is okay. Sure she did inhale a bit of gas and what not, but in Moscow that was never something to write home about... I'll have to get back to Colonel and discuss our further plans. Krest should already be at the Aurora."

"We've got a plan now: capture a trader tugboat and infiltrate the bridge shantytown, lower the bridge and cross the river. Sounds a bit convoluted...

In the meantime, the Aurora crew is steadily increasing. First Krest, now Katya and her daughter... Sure, the more - the merrier, but living space issue has become really pressing. So, now I've got to get to the terminal where Krest has hidden his railcar and use it to tow a passenger carriage back to the Aurora from the old train depot."

"We left Volga behind. The endless expanses of Russia stretch before us now. The bridge dwellers had finally decided to believe that we were not demons and let us pass. Anna was right - we invaded their world and it's not up to us to destroy it, no matter how stupid it may seem. "Electricity is a sin"... is that really worse than the lies we were told in the Metro, about how the whole world was dead and there was nowhere else to go? Everybody in the tunnels bought that convenient lie... Once we reach Yamantau we will, at least, know if that lie was justified, since so far we haven't met any signs of enemy occupation."

"We left Volga behind. The endless expanses of Russia stretch before us now. Regretfully, Duke was not destined to see them. Was his death a fault of mine? Was everything that happened on the Bridge? It could be... It's a cruel world we live in, and it's not our responsibility to fix it.

We only wanted to pass through, and it was not my fault they screamed for blood. Their zealousness reminded me of the Metro, where people are indoctrinated into a lie - that the world is dead and there's nowhere to go... Anyone who questions it gets fed a different lie that the "war is still going on"... Here it's "Electricity is a sin"... Same difference, really..."

"We are approaching the Yamantau bunker, the final destination of our long journey. Direct radio contact with the bunker has completely dissolved Miller's resentment towards me for "destroying our previous lives".

He is eagerly anticipating the meeting with the Minister of Defense he was promised... Probably such things are important for a career officer. The people, though, are less interested, they are asking important questions: where are the occupying forces? Why is there just wilderness and people gone wild around?

What's stopping the Government from restoring the country? What was being done in the last twenty years? Miller believes that we'll get all the answers. He will be pardoned, as well as Anna and I, and we all will return home... to the Metro."

"Three months on the road. Three months of constant trial... But, after Yamantau we are ready for anything fate can throw at us.

Mere kilometers separate us from the "Caspian-1" communications center. Will the maps within yield a spot free from radiation where we could finally settle in peace? I don't know...

But, what's left for us but hope? The desert is taking it's toll. The crew is suffering from heat and thirst, and the Aurora is not in her top form. We're out of fuel and had to switch to burning available fuel: old crossties and twigs..."

"Fanatics on the banks of the Volga, cannibals in the mountain bunker, slavers on the shores of the dried-out sea... How many monsters has the War given rise to! Or, perhaps, they were always there, and the war simply gave them a chance to show themselves and now we're stuck with them forever?

Regardless, we can't afford to lose hope. We are getting closer to our dream: finding a place where we could live, free from radiation and mutants. The maps that we recovered in the Desert provided us with several promising options, and now the Crew members are excitedly waiting for the Colonel's decision on where the Aurora should go next... Currently, though, the train is calmly rolling eastward, the Crew rests, and Stepan proposed to Katya. It was a proposal she couldn't refuse."

"Fanatics on the banks of the Volga, cannibals in the mountain bunker, slavers on the shores of the dried-out sea... How many monsters has the War given rise to! Or, perhaps, they were always there, and the war simply gave them a chance to show themselves and now we're stuck with them forever?

Will Damir, who stayed in the desert to help Giul lead their people to freedom, beat another monster, the inertia of thought, that had been keeping the subjugated locals in willing and ready servitude to tyrants? Frankly, I have doubts - that monster might prove stronger than all the others...

Regardless, we can't afford to lose hope. We are getting closer to our dream: finding a place where we could live, free from radiation and mutants. The maps that we recovered in the Desert provided us with several promising options, and now the Crew members are excitedly waiting for the Colonel's decision on where the Aurora should go next... Currently, though, the train is calmly rolling eastward, the Crew rests, and Stepan proposed to Katya. It was a proposal she couldn't refuse."

"I can't say I've ever been religious... But right now I'm begging all gods - please, watch over Anna... And make the valley cure her of her affliction...

In the meantime, Alyosha and I are on a recon mission - we have no idea what is waiting for us there, though Alyosha seems convinced there are going to be crowds of women eagerly anticipating his arrival.

If that turns out to be the case, then I have the best companion possible for this mission."

"We all remained silent while the Aurora was running along the poisoned sea held at bay by the dam... We believed we'd be back. Now, having seen the sword of Damocles hanging over the valley, we knew it was not meant to be.

Alyosha was especially worried - his Olga is there... Perhaps, he will be able to warn her via Radio and save the people there...

What happens next? I've no idea, I'm ready for anything. Anything, but one thing. Anna... Please, hold on... Without you, I've nothing to live for, nothing to dream about... Doubly so, since if not for that dream of mine, you'd be all right now..."

"Anna isn't giving up. She believes in me, believes in us, and for a good reason. Thousands of kilometers of track behind us, we are finally approaching Novosibirsk, a dead city concealing her hope for life, the medicine that could save her, somewhere in it's cold, irradiated heart...

A year ago, we left the poisoned ruins of Moscow, and now we are about to enter another city stiff in the murderous embrace of winter and radiation. Will we ever find somewhere to live on the surface? Maybe... But for now we're returning back into the bowels of the Metro. Back to save Anna."

Intro Music of The Dead City[]