The Ashot (Russian: Ашот) is a small, Metro-made shotgun-pistol that is introduced in Metro: Last Light and returns in Metro Exodus.

The Ashot is one of the simplest weapons found in the Metro series. A simple piece of pipe with a firing pin and a grip, the Ashot is common amongst all the poor areas of the Post-Apocalyptic world - from the bandits and gangsters of the Moscow Metro to the tribals of the Caspian Sea. The weapon fires a single shotgun shell in its most basic format.

First introduced in Metro: Last Light, the Ashot is a useful weapon up until the end of the game. It is an adequate weapon for close combat. Though slow, it is very economic in shots when taking down mutants like the nosalises in Undercity. It has a higher damage output than the Duplet, Shambler or Saiga, which makes sense that the user only has one round before reloading; but lacks their range, rate of fire, magazine size, and versatility. While this makes the weapon evidently quite lethal at close range, it leaves Artyom very vulnerable - especially when under attack from multiple targets or vectors. It can be used effectively against shrimps, as seen in use by Fedor, but generally, the Ashot is an ineffective weapon in most situations and swapping the Ashot for another weapon is recommended whenever possible. At the beginning of the game, however, the Ashot is very common among Nazi guards in the early stage of the game, so Artyom may have to rely on it for a while due to the shortage of other types of ammunition.

Physically the Ashot is compact, yet unremarkable. These pistols may have been inspired by flare guns, as adaptors in real life can be purchased that can turn flare guns into shotguns. A notable feature of the pistol's design is the offsetting of the barrel during the reloading of each shot, reminiscent of a revolver's cylinder.

The Ashot becomes very useful in the Faction Pack DLC mission, "Kshatriya". Even as a starting weapon, it can fire the powerful 12x70 Dragonbreath rounds, capable of killing nosalis in one shot on every difficulty. However, once again, it is outclassed by the Duplet and Shambler loading the same ammunition, as the Ashot is a poor choice during attacks by nosalis hordes or when facing a librarian. The same goes for the Tower Pack DLC, where the players may find using the Ashot risky.

The Ashot returns in Metro Exodus as one of two shotguns in the game. First encountered in the Volga level, the Ashot can be customised far beyond its pistol format. The addition of a hunting stock and an over-under double barrel put the Ashot into a situation similar to the Duplet in Metro: 2033 and Metro: Last Light. The Ashot can also be upgraded with four barrels and a heavy stock later in the game, significantly increasing the damage potential of the weapon.

The Ashot can equip six different attachments in three slots. Its attachments are similar to the ones available for the Shambler, but it can also equip a "Stock + forend" upgrade, which turns it from a pistol into a short rifle. 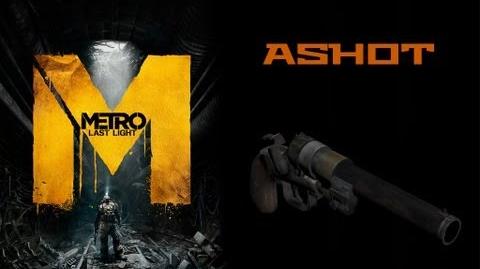 The Ashot offered by a weapon vendor

In-game Ashot, as seen from the first person perspective in Metro: Last Light.

As seen in the pre-alpha teaser trailer

Khan shooting the Ashot in the E3 demo

This one is modified with suppressor, red dot sight, stock and forend and a laser designator.

Artyom reloading his shotgun that is equipped with the stock and forend, showing part of the Ashot's "swing out" mechanism.

Concept Art for the Ashot

The Ashot in pistol form

The Ashot in Metro Exodus