The Aurora (Russian: Аврора) is a heavily modified steam locomotive, boarded by Artyom and Anna to find a new home far to the East in Metro Exodus. It serves as a mobile base in the game. Yermak is the Aurora's helmsman, while Miller serves as its crew's leader.

The Aurora is the primary vehicle and one of the main aspects of Metro Exodus. First appearing after Artyom and Anna attempt to go back to the Metro after finding no radio signals, the Aurora is hijacked by the duo—with the aid of its engineer Yermak—to escape from the Hansa soldiers pursuing them.

The train pulled by the Aurora takes numerous different appearances as the game progresses. When first captured by the Spartans, it consists solely of the engine. In the Volga level, a passenger carriage and a railcar are added. In the Caspian, a van, vehicle storage, and fuel tank carriage is added to the collection. In the Taiga level, Krest's railcar is lost in a landslide. The final addition is gained in the Dead City level. While Miller and Artyom complete their tasks, the rest of the Spartans set out to pick up a large snow plough for the Aurora, which can be seen in the game's ending.

In the open world levels of Metro Exodus, the Aurora serves as the base of operations for Artyom. While workbenches can be found around the world, Artyom can only swap out weapons at the one aboard the Aurora. During the Volga level, the Aurora's weaponsmith, Tokarev, will provide Artyom with the Tikhar, a pneumatic air rifle. When he returns to the Aurora over the course of the game, new upgrades are unlocked. 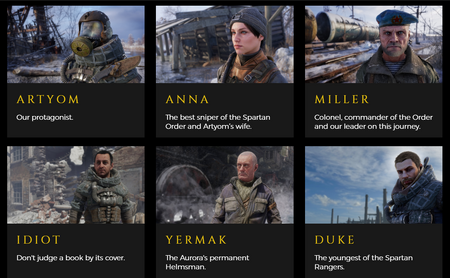 The team aboard the Aurora can grow or diminish in number over the course of the story of Metro Exodus.

A group of rangers from the Spartan Order form the basis of the crew from the start of the journey, but new individuals can be recruited to join Artyom along the way.

The Aurora's crew include:

As well as the Spartans, others can join the crew. These include:

Aurora as seen in one of the Metro Exodus trailers

Aurora in the level Volga

Rear section of the Aurora, which allows connection and passage to train carriages

The Aurora moving through winter Russia

Another shot of the Aurora from the level Volga

The snow plough installed in front of the Aurora

The journey of the Aurora throughout the events of Metro Exodus
Deutsch Polski Русский
Community content is available under CC-BY-SA unless otherwise noted.
Advertisement