Bite with sharp teeth and punch with strong arms, also able to utilise basic tools and debris as weaponry

Encountered on numerous occasions by Kamila Czapnik and her soldiers

The błotniak (a Polish name derived from the Slavonic root for mud, swamp, moor, marsh, etc.) is a semi-intelligent, humanoid mutant that lives in the parts of the Vistula river that flow through Kraków and its surrounding areas.

These marshland humanoids inhabit the swamps on the banks of the Wisła around Kraków and Tyniec. They are excellent swimmers and can breathe underwater - while their powerful legs let them launch their short yet wide bodies high up into the air when jumping. Their short arms don't have claws, but are strong and covered in hardened skin to make grabbing or throwing mud easier.

The jaw of a błotniak is armed with 2 rows of formidably sharp teeth and an elongated tongue; the toxin contained within the saliva of a błotniak is not enough to kill an adult, but can seriously burn a grown human and could lead to the loss of consciousness when received in larger amounts. Just like with human bodies, the heart of a błotniak is also located on the left side, but closer to the centre and about 10 centimetres below the head.

Błotniaki, as their plural is called in Polish, reproduce at a much faster and more frequent rate than humans; they mature within just 3 months, but their lifespan is unknown. There is a soft, vulnerable spot on a błotniak's head - between its eyes - that can be targeted for greater damage. Usually they live in packs of up to 20 individuals led by an alpha male, but they are capable of forming basic societies similar to the early tribal organisation of Homo sapiens.

A large group of around 50 błotniaki, encountered by Porucznik Kamila and her comrades, formed a strong alliance with a group of human outcasts and barbarians under the leadership of a young man dubbed "Świeży". They learned to communicate with each other, the men teaching them how to fight and use tools, while the mutants taught their human brethren more about the post-nuclear world. Prior to this union most interactions between mankind and the błotniaki were hostile, as each group hunted the other for food and control of territory.

Squawking, murmuring, and other similarly sounding noises are the primary means of communication for the błotniak. Some representatives of the species, such as Mucholec, have names (it's unknown whether these are titles they selected themselves or if they were given to them by their human allies). 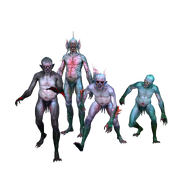 Variants of the mythical Slavic undead "utopiec" and "topielec", as seen in Polish video games

The vodynaoi, as seen in The Witcher
Community content is available under CC-BY-SA unless otherwise noted.
Advertisement