The last surviving member of its race.

The Dark One (alternatively Baby Dark One or Little Dark One) is a major character in Metro: Last Light, who is the presumed last survivor of the Dark Ones and an ally to Artyom.

Unlike adults of his kind he has red skin, green eyes, and a mouth. At first, he's nude like the rest of his kin, but he finds some ragged clothes in the level "The Crossing" which consists of pants, a cape made from a shirt, a bag, and some wrappings on his legs and hands. While in Polis he disguises himself as a young child in a raincoat too big for him.

Aside from the characteristic telepathy, the Dark One also demonstrates abilities such as allowing Artyom to see the outlines of enemies through walls and ghost outlines of phantoms. He is also able to not only read the minds of humans and mutants alike, but also their intentions and whether or not they are good or evil.  He seems to be intrigued by the way the people of Metro live and is also shocked by the fact that before the war, people lived in such high skyscrapers. He tends to liken himself to the human race, collecting clothes, disguising as a child, and even waving cheerfully to Rangers in Polis.

He is also a helpful companion as he finds Artyom filters, ammo, and medkits or warns him about danger. During the level "Bridge", he protects Artyom by distracting a Demon.

According to the Dark One, he has access to all the memories of his race. The extent of these memories is quite ambiguous given the fact he knows of how and when Artyom received the ability to withstand their telepathy without going insane or dying, yet didn't seem to know about World War III until he extracted the information from Artyom's memories, though this is probably due to the Dark Ones being either mutants spawned after the war, or experiments created before it and kept in a facility (thus being ignorant of the events on the surface). Artyom theorizes in a journal entry that young Dark Ones 'sleep' underground for a time after their birth, absorbing memories of their race, and the missile strike awoke the Little Dark One before his memories were fully formed. 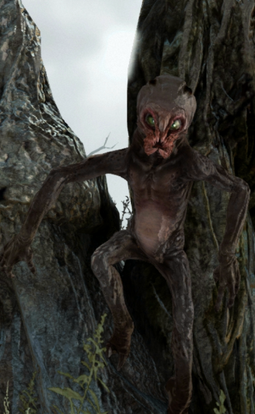 The Dark One has a lot of supernatural powers, including:

Shadow Walk - The Dark One changes into a puff of black smoke and moves rapidly.

Dark One Vision - While using this ability, the Dark One (and Artyom thanks to him) can see through solid objects and identify enemies. It also shows weak points of certain enemies.

Personality sensing - This comes along with Dark One Vision, it shows one attitude toward Artyom. Friendly dispositions (Khan) appear as silhouettes with green lines (nervous system), neutrals (Miller) appear as yellow lines and enemies (Watchers) appear with red lines.

Memory exchange - By touching anyone, the Dark One can either take over or give back memories.

Telepathy - The Dark One can "speak" with any being by touching them. This does not apply to Artyom: they can contact each other no matter the distance.

Illusion Generation - The Dark One is able to take the appearance of a little boy to camouflage himself among humans. This is likely a telepathic illusion.

Because he is not an adult, the Dark One hasn't reached his full potential yet. He cannot use his powers all the time, and will often comment that he's "tired".