Bandits has other uses. Please see Bandits (Disambiguation) for other meanings.

Church of the Water Tsar

Aurora Crew
Refugees of the Metro

Bandits are typical criminals within the metro, banded together in unorganized groups of cutthroats, hooligans, robbers, drifters, and murderers.

It has been 20 years since humanity retreated underground, and supplies have become very scarce. Food, filtered water, or weapons are extremely precious and valuable. Housing and shelter are even harder to come by with many stations having strict policies against outsiders. This type of life turns people away from earning a living, and towards the deadliest forms of anarchism, taking what they need to survive. Bandit groups are the result, and they are a real threat. Usually staying in small groups to ensure maneuverability, some gangs band together in hopes of forming their own empires, occasionally taking over entire metro stations. While bandits tend to plunder and kill for what they need, they do not raise an eyebrow at the prospect of torturing and raping their victims, either. Some of them also seem to wear hockey masks as sort of a symbol.

There are many bandit groups in the metro, and each gang is usually different, in terms of command structure, weapons, resources, and size, ranging from gangs of hooligans to organized thugs. The group that is encountered in Dry Station, are better armed than other gangs, equipped with Kalashes and Shamblers. They seem to stick to Dry Station and have poor living conditions, mostly sleeping in shacks made from scrap. The gang encountered in the level of the same name are the opposite. They are rather ill-equipped, armed mostly with carbine versions of the Lolife or long gun versions of the Ashot, and some other lower-tier automatic weapons. They are, however, much larger and cover more territory. They also live in what is presumably mechanic quarters which offers better shelter. A unifying feature of bandit groups seen in both games is that their speech (especially in the Russian dub) is full of prison jargon and characteristic intonations, indicating that their members were patrons of the Russian penal system before the Great War or adopted the mannerisms of those that were.

Artyom first encounters the bandits while traveling with Bourbon. On their way to Market station, Artyom and Bourbon encounter various bandit traps, dead caravanners, and empty camps. The first bandit is drunk and is dealt with silently by Bourbon, this is also the first human kill Artyom experiences. Shortly after this bandit is killed, the pair infiltrate a bandit camp, where they must fight their way through to get to the next station.

After crossing the surface, the pair eventually reach Dry Station, a bandit base, where Bourbon is captured. Artyom now must escape the bandit base, either by engaging the enemy or stealthily navigating his way out. Just as Artyom reaches the back of the bandit base where Bourbon is being held, the bandit leader who is about to execute Bourbon is startled. Bourbon quickly grabs the leader's pistol and fires at him, but before the leader is killed, he grabs a Kalash off the floor and fires at Bourbon. Both are seemingly killed, however the events of Last Light's Chronicles Pack imply Bourbon survived the encounter.

For the remainder of the game, the only bandits found are dead ones, since from here on it's Communist and Nazi territory. The dead bandits found between Riga and Market Station were presumably killed by Hansa patrols or mutants.

In one the of the screenshots for Metro: Last Light, a man is depicted as going through a surface wetland. They are shown wearing a hockey mask, possibly marking him as a bandit.

In the game, a large group of bandits are encountered in the level "Bandits", where they ambushed a line of Red Army deserters and refugees, killing most of the convoy's fighters while taking the women and children as captives. Artyom has a number of opportunities to help and rescue some of the captured refugees, or leave them to their fate and proceed down the line to the next level. These bandits encountered here are all lightly-armored and armed with few weapons. Also, they are usually encountered in dark areas, making it fairly easy to sneak up and kill/knock out all of them with the use of stealth.

In Venice, a more organized underground version of bandits are encountered called gangsters. Instead of attacking everyone on sight, the gangsters rather run Venice in a way being the biggest organization in the whole station. While they do not terrorize the station citizens like ordinary bandits, they do rob and are free to do whatever they want with little to no opposition. A gangster leader named Kisliy is mentioned by Pavel and several of the prostitutes in Venice. He and the brigands under his command assisted the Reds in delivering the virus containers to Oktyabrskaya. Pavel killed Kisliy or another bandit leader in a disagreement before being confronted by Artyom.

Shortly after, Pavel is captured by the same gangsters who want revenge against him for killing that same leader. He quickly escapes, then fights his way through the bandits camp and base underneath Venice.

Bandits are also active on the surface and are present all over post-apocalyptic Russia. They have a particularly large presence in the Volga region, where they attack caravans making their way upriver. They also constantly harass the local populace and frequently come into conflict with the Church of the Water Tsar. It isn't uncommon for bandits to kidnap villagers and hold them for ransom, only to kill them when they realize they will not get payed or, alternatively, sell them into slavery.

Bandits are also present in the Valley, though they face fierce resistance from the Children of the Forest, and most end up getting killed by the group.

Drawn to the rumors of a wealthy, prosperous community, bandits quickly swarmed Vladivostok. The population was unable to deal with them effectively until the arrival of Tom and his group. Due to the brutal methods of Tom's right-hand man, Klim, most bandits were either killed or fled. Since then, the remaining bandit groups have stopped preying on civilians, instead largely focusing on capturing and taming the local humanimals, whom they then sell to traders from the south. They are still extremely territorial, however, and will open fire on any ships without the proper colors.

Bandits are never seen in the novels, though they are mentioned several times. Bandits periodically raided VDNKh station from the southern tunnels. In one of these raids, they killed Artyom's friend Vitalik, sneaking up on him and shooting him in the back of the head. As a result of these raids, one of the southern tunnels was collapsed to make the station easier to defend. Kitay-gorod station is run by two criminal gangs, similar to Venice in the video games. While one half is run by a Russian gang, the other is run by Caucasian gangs.

In Metro 2034, Istomin and others at Sevastopolskaya theorise that Tulskaya has been taken over by bandits, though this is later proven to be false.

An early screenshot of Metro: Last Light showing a bandit on the surface. 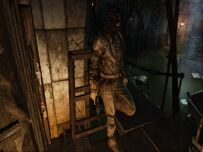 A Bandit at Venice

A Bandit at Venice 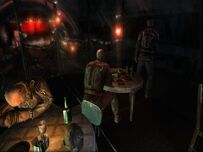