The blind ones (Russian: Слепыши) are a species of large, simian mutants who occupy the research Institute in Novosibirsk.

The blind ones closely resemble pre-war gorillas, except for their complete lack of eyes and their tendency to walk on two legs. Their lack of eyes means that they primarily rely on sound and smell to locate their prey. Blind ones are extremely strong and durable, able to kill any human or similar sized creature in seconds. They are one of the two types of surface mutants found in Novosibirsk, presumably because they are the only ones able to withstand the radiation levels. The blind ones have also developed an ability to telepathically communicate with each other. They are also able to do so with humans, since Artyom is able to understand them. This suggests a very high level of intelligence, comparable to the Librarians or even the Dark Ones. Though it is assumed that Artyom's hallucinations in the Institute are caused by extreme radiation exposure, it's possible that he is being psychically attacked by the blind ones. It may be that both of these factors are happening, since if Artyom stays for too long in a room with the blind ones, some sort of radiation "blowout" will occur. This "blowout" will disorient both Artyom and any of the blind ones caught in it, making them grab their heads and scream in confusion. While they are extremely territorial in the Institute, they appear to be less hostile while outside, as one can be seen walking away from Artyom when he is traveling to the Institute.

Blind ones are also encountered by Khlebnikov during the events of the Two Colonels DLC. This is the first time when they are seen interacting with nosalises. At some point, when the colonel is nearly overwhelmed by the aggressive pack, a blind one appears. Most of the nosalises fled immediately, while the one which had already pounced on Khlebnikov was grabbed by the blind one and tossed around like a rag doll. This particular blind one even used the nosalis bodies as weapons and threw them at Khlebnikov with little effort. Interestingly, it seems the nosalises waited for the blind one to leave the area before engaging the colonel again, further strengthening the theory that they fear and avoid blind ones. When the colonel went deeper into the underground and reached the blind one lairs, he stumbled upon a large number of dead nosalises. While most of them were already eaten to the bones, many of them were ripped in half and left there. This could mean blind ones and nosalises are in conflict or the former simply prey on the latter. This killing en masse is not unheard of in nature, because many predators practice this method, called "surplus killing". If that's the case, the nosalises might simply be an important food source for the blind ones, which kill as many as they can and deposit their remains for later consumption.

When faced with a blind one, running is the last thing Artyom should do, since they will immediately know his location and give chase. Likewise, engaging one in combat is ill-advised, since it will take excessive gunfire to bring one down. The best option is to sneak around it. Keep in mind that a blind one will be able to sense Artyom if he is nearby, even if he's crouching, and will start following him, though it will not attack until he is close. At walking speed, it moves slightly faster than when Artyom is crouched, so it is best to hide behind walls and other objects if one wishes to escape unscathed. As they hunt by smell as well as sound, it is best to not loiter for long, and keep moving around them. Throwing decoys is an effective method for evading blind ones as they are easily distracted and/or tricked by them. If engaging in combat is necessary, some very effective weapons against The Blind-ones are the Helsing with explosive-tip arrows/bolts and molotov.

There seems to be some inconsistency regarding the blind ones and their weakness to fire-based attacks. While a single one can be killed by two molotovs on Normal difficulty in the base game, the only blind one which has to be engaged in The Two Colonels DLC seems to be much more resistant to fire. Even though the creature was screaming loudly and was clearly in enormous pain when set ablaze, the constant barrage of fire from the flamethrower couldn't kill it. This could mean that particular blind one was unusually powerful and resistant or it was simply not meant to be killed, as part of a scripted event.

"What is this?"- A blind one questions Artyom during his first encounter with its kind.

"Come here, enough hiding!"- A blind one tries to lure Artyom out of hiding.

"Where are you?"- A blind one searching for Artyom.

"What noise? What thing?"

Close up to a Blind One specimen

Facial Features of the Blind Ones resemble typical simians, apart from the lack of sensory organs/eyes. 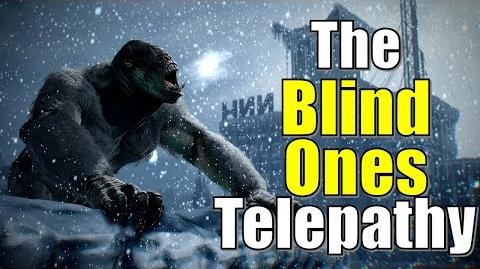