Boris has other uses. Please see Boris (Disambiguation) for other meanings.

Boris (Russian: Борис) was one of the Rangers who accompanies Artyom through the path to D6.

Boris was first encountered at Sparta. He and the remaining Rangers left the base to head to D6 with Artyom and Miller. He and Stepan appeared to be best friends, as they were always fighting side by side.

As Artyom attempts to open a gate leading further into D6 the lever malfunctions, forcing him to hold and unable to defend himself when attacked by a nosalis. Boris notices that Artyom is in danger and rushes to save him, killing the nosalis. As Boris moves to help Artyom out from under the dead nosalis, however, an albino nosalis attacks him from behind and began to drag him through the door. Unable to break free, Boris kills himself using one of his grenades in order to take the albino nosalis down with him.

Upon seeing the death of Boris, Stepan ran to his side in an attempt to help his friend only for Miller to explain that there was nothing they could do, to which he exclaimed that the nosalis would pay for what they had done.

It's revealed later after Artyom is separated from the team that Stepan didn't survive, likely falling to another nosalis attack.

Boris appeared on the following levels:

Boris in his original Ranger armor. 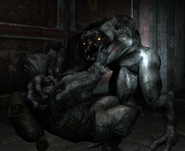