The Bulldog (Russian: Бульдог) is an assault rifle first introduced in Metro Exodus and essentially a bullpup configuration of the Kalash. The origins of the Bulldog likely predate the Great War, but the look of the weapon suggests it was modified or extensively repaired with whatever spare parts were available after the war. Nevertheless, it is an advanced weapon design, similar in some ways to Kalash 2012.

Although at first glance its design might seem to be based on that of the Kalash, the Bulldog is significantly better than its elder brother in the amount of damage it deals, how easily it handles, how much lighter it is, and how accurate its shots are - all in part due to its bullpup configuration. Furthermore, with a lower rate of fire, each burst from the rifle is more controllable than shooting from a Kalash.

The Bulldog's downside is that it is much rarer than its more traditional brethren from the Kalashnikov family, making it more difficult to find spare parts (not to mention the complex mechanics that require skillful maintenance to keep running). This usually makes the older Kalash more popular among survivors of World War III.

The Bulldog shares most attachments in the Stock slot with the Kalash and the Shambler. It also shares all Barrels, the 30-round mag and the 45-round mag with the Kalash. Instead of the 75-round cylindrical mag available for the Kalash, it comes with a unique long 60-round curved magazine, which can be found in the Caspian level. It also shares the reflex sight and the NV scope with most rifles, and the x6 scope with the Valve. Same as most weapons, it can equip both red and green laser.

Full side view of the Bulldog

Another view of the Bulldog

Detailed view of the Bulldog 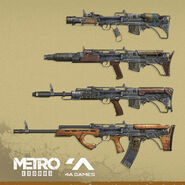 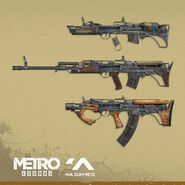 3D model of the Bulldog, created for the game by Mykola Myhalenko

Bulldog with red laser and scope, model by Mykola Myhalenko

In-game removal of dirt from the Bulldog

The Bulldog from the first-person perspective