Children of the Underground

Children of the Underground

The Children of the Underground were a paramilitary group of metro inhabitants that Artyom encountered outside Hole Station. While holding a blockade to protect their settlement, they recruited Artyom to help defend it. The blockade failed, as the mutants broke through and slaughtered most of the people inside the settlement. The last survivor, a wounded commander, tasked Artyom with relaying a message to Polis, to destroy the tunnels (ultimately destroying their home) because the mutants cannot be stopped. 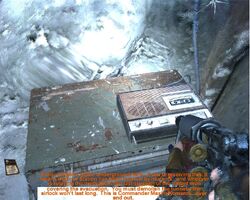 The player will receive positive Moral Points for both accepting this mission and for completing it. To accept the mission, the player must listen to the leader's dying words, and take the tape from his hand as he gives it to Artyom.

To complete the mission, while on the surface mission Outpost, on the way to Black Station, at the top of the Nazi outpost there will be a transmitter guarded by two demons. Kill the demons and relay the message. The achievement DJ Artyom will be awarded for playing the message.

The radio broadcast that Maxim Komarov gives to Artyom: "Polis - Children of the Underground here. If you're receiving this, it means that our Station has been overrun by mutants... and whoever is relaying the message is the last survivor of the valiant men covering the evacuation. You must demolish the tunnels. the airlock won't last long. This is Commander Maxim Komarov... Over and out."﻿

Listen to that quote:

Leader of the Children of the Underground, Maxim Komarov

Rifleman of the group