D6 has other uses. Please see D6 (Disambiguation) for other meanings.

The Rangers of the Order

D6 (sometimes written as D-6, Russian: Д-6), also referred to as Metro 2, is a desolate top secret government/military facility, featured towards the later part of Metro 2033, and is prominently featured in Metro: Last Light. A focal point of the game's plot, it's in this sealed facility that Artyom must aid his companions in finding and arming the missile launching facilities outside Moscow, necessary to strike at the Dark Ones.

A location very similar to D6 is mentioned in Metro 2035, but the name itself is never used and the place is only referred to as a "bunker". It's an important strategic point that saw a massive attack from the Red Line happen, just like the Battle for D6, sometime between the events of the book and Metro 2034.

Located deep underground near the Barrikadnaya and Mayakovskaya Stations and west of Reich, D6 is a massive bunker-like facility whose access routes are well-hidden in the Metro, and existence is regarded as something of a legend among the underground dwellers. Information found at the Lenin Library allow Artyom, Miller, and a group of Rangers, each with their own specialty, to reach one of such entrances, located near Kievskaya Station. It could be presumed that said accesses are roughly similar to each other, consisting of massive airlocks concealing rooms used for storing machinery and spare equipment, gradually leading further underground, to what appears to be the remains of an old mine shaft. Even deeper are the only known ways into the facility itself, automated monorails which lead directly to D6 via tunnels separated from the metro. Said network is known as Metro-2, and unlike the main Metro is built on a monorail system instead of the standard two rail design. The Metro-2 network, being built deeper underground, is far more intact and traversable. It is unknown how far in each direction the network stretches, but there are at least six distinct lines and it's possible to directly reach Telesentr (the Ostankino TV tower) and the Botanical Gardens in the more northern part of the city from D6, which is located in the western portion somewhere under the Green Line. It is known that of all the Metro-2 lines (which are designated C1-C6), Line C5 heads eastwards, Line C3 heads north/northeast, and C4 heads southwards towards Kievskaya. It's likely the Metro-2 trains connect to the major government installations: FSB headquarters, Vnukovo Airport, the Kremlin, and other important surface facilities.

D6 itself is an enormous installation centered around a very large central shaft comprised of two main sectors and one smaller sector, each with four sub-sections: A1-A4, B1-B4, and D2. The perimeter of the shaft houses the Metro-2 automated monorails and the control station that directs electricity through the facility and controls the air re-circulation system. To descend into the facility proper, two rail carts can be utilized, spiraling downwards to the four main floors of the shaft:

On every level of the facility are electric trams used for transport of personnel and materials, though most are inoperable after 20 years due to power failure. Massive sealed doors on all the floors of D6 apparently lead to unknown parts of the facility, including huge storage rooms filled with military hardware - tanks and other armored vehicles, missile launchers, including what appear to be RT-2UTTKh "Topol-M'" Mobile Intercontinental Ballistic Missile units, huge stashes of ammunition and weapons, and so on. If the weapons stored in D6 are not enough, the facility has remote control of many other missile launchers outside the D6, including the BM-30 Smerch mobile rocket launcher, although most facilities are destroyed before the Rangers' arrival, with only one unit in the outskirts of Southeastern Moscow being active.

When Artyom and his group reach D6, the facility is sealed off and in a state of complete abandonment, its main facility filled with toxic gases, requiring the use of a gas mask, and completely lacks electricity. After a brief struggle with the main control station, Vladimir manages to reactivate the barest minimum to allow Artyom to manually reactivate the air filters and pump out the toxic air, which allows a complete restart of the main electric systems, including the control room of the lower floor. However, the back-up generators run dry shortly afterwards. Because of this setback, Artyom and Miller are forced to travel into the deepest bowels of the facility, which are flooded and infested by strange amoeba-like creatures, with a very huge specimen hindering access to the reactor. Artyom is forced to reactivate the nuclear reactor manually, during which the massive growth attacks him with a tentacle-like whip. After successfully re-activating it, the creature appears exhausted and dying, and Miller comments that after killing the Dark Ones, more Rangers will come to the area and 'finish the job'. While Artyom and Miller are heading to the tower, the rest of the Ranger group stayed in D6, preparing to launch the BM-30 missile strike against the Dark Ones.

In the novel, Melnik, a group of commando Stalkers, Artyom and Anton go to D6 from the station Park Pobedy. They go trough multiple stations before reaching Kremlin station where the Biomass tries to kill them, but instead only kills Oleg and one of the rangers. They later get to a crossing where they split up. Melnik, Anton and the group of stalkers continue towards the rocket base, while Artyom and Ulman exit D6 trough the Mayakovskaya station, to continue to the surface, to the Ostankino tower. 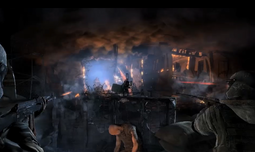 D6 plays a pivotal role in Metro: Last Light. One year after the destruction of the Dark Ones, the Rangers have taken and fortified the military complex. It is the first location in which Artyom starts his mission. It also serves as his second home after Exhibition. In this time, D6 became revered in the metro as a place of wonder - where advanced technological miracles would soon be unearthed, that would save the people of the metro. Inside, however, appeared to only be more weapons to wage war with - and eventually an enemy thought dead. At this time of quieting disappointment, and unknown to the Rangers, a Red Army operative managed to sneak away with several biological weapons that General Korbut planned to use to bloodlessly conquer the whole metro. 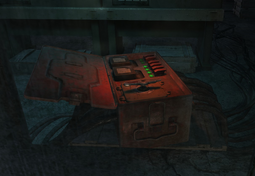 Despite all attempts to stop the Red Line and reveal the Communist plot, the Rangers fail to prevent Korbut's plans to steal all the samples of the virus from D6. A massive battle for D6, and the climax of Metro: Last Light, has the Rangers of the Order and the Red Army warring on the platform, culminating in the inevitable loss of the Rangers. Battered and unable to fight the sheer number of enemies, Miller and Artyom execute a fail-safe contingency that will destroy D6 (with everyone in it) in order to save the metro from Korbut. The plan succeeds, or fails in the genuinely good way, depending on the Artyom's actions along the journey of the game. If the plan worked, as according to the standard C'est La Vie ending, D6 is destroyed, with all the Rangers, including Artyom, deemed martyrs for the metro. If the plan fails, it's because moments before Artyom is about to turn the switch of the detonator - the Baby Dark One phases into view and stops Artyom, letting him know that he has returned with his kin, the hibernating Dark Ones mentioned briefly before the battle, to save them. In the Redemption ending, D6 and the Rangers are saved, along with the entire metro.

D6 appears briefly in the beginning of the game, as Artyom ventures to and from it, searching for an outside radio signal. After escaping the Metro and finding the "Ark" facility, Miller mentions that it's built exactly like D6, as both facilities were constructed using the same standard design. This allowed the Rangers to quickly regroup after being captured, and swiftly search the facility to find Anna.

D6, also known as Metro-2, is an underground transport system, which is used by the Russian government as a shelter. This system connects critical institutions of the government and military departments. Construction of D6 was started in the 1960s. Tunnels of this system can be used by trains and cars.