The DShK 12.7mm Machinegun (Дегтярёва-Шпагина Крупнокалиберный or Degtyaryov-Shpagin Large-Calibre) was a Soviet heavy machine gun developed in the middle of the 20th century. It's seen as an emplacement weapon throughout the Metro.

DShK is seen in all three Metro Games, but it's only directly usable in Metro 2033.

The DShK machine gun is normally employed at checkpoints or heavy defensive positions as a way of dissuading attackers and dealing with mutants, infantry and vehicles alike. It's the single heaviest weapon in Metro 2033 in terms of damage, exceeding that of the Abzats.

The DShK machine gun is an incredibly powerful, albeit situational, weapon. It is capable of killing any human opponent and almost any mutant with a single shot.

Its strengths, however, are offset by a few limitations. The machine gun is immobile and cannot be moved from its original location. It has a limited amount of ammunition on most occasions and overheats fairly quickly during continuous firing, though its temperature can be monitored by the thermometer attached to the right side of the weapon. The DShK in game has average rate of fire but with a large cone of fire, which can cause a lot of misses. To control the recoil, firing it in bursts or in single shot is advised; this also keeps the gun from overheating. Only fire in full-auto when attacking vehicles or strong enemies.

The weapon is used at various times during the Metro 2033 campaign and is used by Artyom to great effect against both humans and mutants. There are DShKs seen in Metro: Last Light, however none are useable or used - this is likely because the role of a heavy machine gun was replaced by the Gatling. 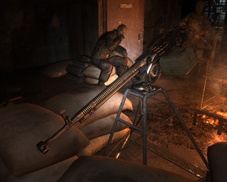