Danila has other uses. Please see Danila (Disambiguation) for other meanings.

Danila (Russian: Данила) is a young Ranger, from Polis, who accompanies Artyom and Miller towards the Great Library. His appearance in the video game is a combination of Daniel and Ten from the novel.

Danila travels with Miller to the Library, while Artyom takes a different way, to avoid arousing suspicion. When he, Artyom, and Miller reach the main hall of the Library, a demon flies through the ceiling. The mutant then picks Danila up and tries to fly off with him out of a window. Under Miller's and Artyom's combined fire, the demon releases its grasp on Danila. Danila falls and slams onto the floor, badly injuring him, which forces Miller to take him back to Polis to receive medical attention, leaving Artyom on his own. He seems to be a joker like Ulman, although Miller seems to tolerate them.

Danila appears on the following levels:

Danila, called Daniel in the novel, accompanies Artyom, Melnik, and Ten, another Stalker, to the Library, to aid Artyom in finding a secret book that will supposedly save VDNKh. Daniel is a Brahmin (a secretive caste of priests who seek to learn and further knowledge), and so is not experienced in combat. Melnik and Ten lead the two to the Library, where they separate. Exploring the deep maze of corridors, Artyom and Daniel try to find the book, but to no avail.

Having gone through many floors, they finally reach a large room with thousands of books. Daniel believes this is where the book could be. As Daniel bends down to tie his shoe, Artyom goes on looking for the book. Unable to find it, he heads back to where he last saw Daniel, however the latter is nowhere to be seen. After pacing around looking for his new friend, Artyom hears an eerie voice calling his name. To his horror he sees Daniel in a puddle of his own blood, impaled by a Librarian's claw. The Brahmin was mortally wounded and in agonizing pain. He tells Artyom that his pockets contain something that would help his station in its fight. Convulsing in pain, he pleads Artyom to kill the creature, as the Librarian ominously mimics him, hidden behind his body. Artyom, knowing there is nothing he can do for Daniel, shoots through him to kill the beast. Searching Daniel's body, he finds a map and a document that Daniel claimed would help Artyom defeat the Dark Ones.

Artyom leaves his body and reunites with Melnik and an injured Ten. Melnik has to take Ten back to Polis, so Artyom is forced to travel the surface alone - he cannot go back to Polis empty-handed, especially with one of their Brahmin dead.

Danila inside the library 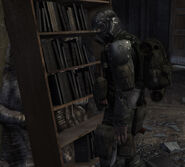 Danila looking at books in the library