Often the German Shepherd, which in turn is derived from the Wolf

The dog (Russian: овчарка - meaning shepherd, Polish: pies, also owczarek for shepherd) is a domesticated animal that appears in several books of the Universe of Metro 2033 series, the novel Metro 2033, and in Metro Exodus.

In Metro Exodus, the dog is one of the enemies that Artyom might face - usually in service of bandits or other opposing factions. Since they were taken by humans into the underground or looked after in the wilderness, dogs seem to have survived the nuclear war without undergoing any mutation, so they have retained their pre-war appearance and behaviour, as opposed to the deformed watchmen. Dogs are often trained by humans to perform guard duty or to help track down hostiles and find desired objects.

The Trotskyists that Artyom encounters during the events of Metro 2033 travel with a dog named "Karatsyupa". In Poland, Kamila Czapnik's home community in the Tyniec Stronghold relies on dogs for guard duty, as we learn from The Promised Human. The book Dark Tunnels also makes mention of dogs in the Moscow Metro. The wild ancestor and related species of the dog is the wolf. 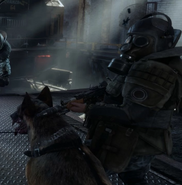