Dry has other uses. Please see Dry (Disambiguation) for other meanings.

Dry station is a metro station in the post-apocalyptic Moscow wasteland that has been fortified into a bandit base. It is seen in the level "Dry", and mentioned in "Dead City", "Market", and "Riga". Artyom and Bourbon make their way through the Moscow wasteland to get to the ventilation shaft leading into Dry.

The layout of the station is of a typical modern day Moscow station; a long middle passage, with many offshoots leading towards the platforms. About half way through the station is a wood and scrap metal barricade separating the station in two. On the one half is primarily the recreational area along with sleeping quarters, toilets (which a man can be seen running into if the player is stealthy), a rat-race (used for gambling, shooting targets), and target ranges with some arrows on it.

Dry station occupies the place where Sukharevskaya station is in the novel. The station in the novel holds very few similarities with this place. This is where Khan meets Artyom, and then escorts him and Ace to the next station.

A crazed caravan master, silently conversing with a skull can be found under the floor of the main room.

Within the box maze is a lazying soldier and his hookah.

On the opposite side of the box maze is a caged pair of dark nosalises.

Sukharevskaya as seen in the Metro 2033 VK game. 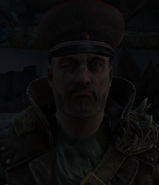 The Godfather of the Sukharevskaya Bandits who is later killed by Bourbon.
Community content is available under CC-BY-SA unless otherwise noted.
Advertisement