Also known as the Double-Barreled Shotgun, the Duplet (Russian: Дуплет) is a scratch-built double-barreled shotgun crafted in the metro. It has two barrels with one shotgun shell in each. While this system has considerable drawbacks, including a very limited ammo capacity, the Duplet is capable of causing more concentrated damage at close range than any other gun and remains a powerful and respectable weapon because of this.

The Duplet, like the Bastard gun, is a poor gun on paper. It holds very little ammunition, has an extremely wide scatter pattern, and a sluggish reload (though still better than several other guns, including the Uboinik, which takes considerably longer to be fully loaded). What these statistics fail to take into consideration is that the Duplet possesses the single highest primary-fire damage in the game; firing both barrels up close will one-shot kill any enemy shy of a demon, librarian, or plated nosalis, given a head-shot (these enemies all require considerably more firepower regardless). When playing on the Ranger difficulties the Duplet can be an extremely effective weapon, not only because of its availability, but because it's firepower is enough to kill a nosalis or lurker in one shot at point-blank range.

The Duplet's basic use is not a complex one: Get in close, give both barrels, either sequentially or at the same time - but in practice, it is much harder to make full use of.

It's extremely easy to miss cagier and evasive targets, especially at closer ranges where the spread pattern is tighter - where it also does the most damage. Because of its long reload time between shots, it is extremely easy to wind up in a position where you are caught with empty chambers in a firefight, and thus in particular danger when fighting down enemy opposition, especially when the mutants are at your face.

It is by no means a bad weapon, and can indeed be used throughout all of the game without suffering from the change of pace, but many prefer the Uboinik due to its greater ammo capacity and added melee capability (not available for Metro: Last Light), both of which make the Uboinik considerably easier to use and more lethal than the Duplet - even if it lacks the Duplet's raw punch from both barrels. The Uboinik also has a considerably tighter spread, meaning it maintains its lethality over longer ranges, whereas the Duplet's damage drops dramatically beyond close-range. In Last Light, the player who use shotguns a lot may prefer the Saiga as its superior to the others in many ways, or Abzats, although not everyone can obtain it.

In Metro: Last Light, the Duplet is the second shotgun available to Artyom, after the single-shot Ashot, and appears early in the game. The Duplet is considered a better choice than the Ashot in nearly all situations due to a holding capacity of two shotgun rounds that reload quickly, rather than one. As in Metro 2033, the Duplet suffers from a small capacity. Despite its improvements and mods, the weapon is not a strong choice to play through most of Last Light with, as frequent reload in hot situations may prove dangerous. Players that prefer to use shotguns may consider replacing their Duplet early on with Shambler, Saiga, or even the Abzats. The player looking for the maximum close range firepower in one blast may consider this weapon as it can shoot four rounds in an instant via weapon attachment.

The Duplet can equip six different attachments that come in two attachment slots. Duplet has two unique upgrades not found on any other weapon - the Ergonomic grip, and a "Four Barrels" upgrade, which lets the player fire either two or four shots at once.

The Duplet doesn't entirely return in Metro Exodus, but a similar weapon can be mocked up by modifying an Ashot with the Double Barrel upgrade. This weapon lacks the two-shot firing mode of the proper Duplet, however, but can be aimed.

It does, however, make a quick cameo appearance in Sam's Story. The Captain, upon meeting him for the second time, wields it against a Humanimal who is attacking him from a window, but the weapon jams and fails to fire. After Sam killed the mutant with an axe, it came tumbling out of said window and taking the Duplet with it. 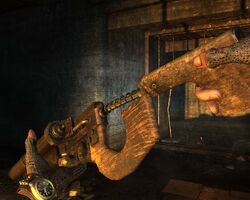 In-game Duplet, as seen from the first person perspective in Metro: Last Light.

Artyom using the Duplet in Metro 2033.

The Duplet in Last Light.

A duplet with four barrels and a laser pointer.

Duplet with Laser Designator in "The Swamp" level.

A Duplet with no grip in Last Light.

Artyom facing a demon, armed with a quad barrel Duplet.