This is the article page for equipment. For related articles please refer to the category page. 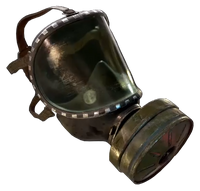 Equipment is the term used for various secondary tools at the player character's disposal throughout Metro 2033, Metro: Last Light, and Metro Exodus.

Various consumables, tools, or gadgets to aid Artyom in combat and survival are available throughout the metro. Most pieces of equipment are not directly used to combat enemies, but rather to increase the chances of the player character's survival by protecting them from attacks or environmental hazards, helping them to navigate better or allowing them to sneak past enemies undetected. Many pieces of equipment are available right from the start of the game, some have to be found or are given by friendly characters and some can be bought in stores. In Metro Exodus, certain consumables can also be crafted and several pieces of equipment can be upgraded at a workbench.

Most pieces of equipment can be found in all three games (sometimes with minor differences between each of the iterations), but some are unique to one specific game. This mostly includes armor variations and some new tools that appear in Metro Exodus, such as Binoculars.

Equipment found in all three games[]

Also note that in the level "Kshatriya", filters are more expensive than usual, costing 20 MGRs for the first filter, increasing by 5 after subsequent purchases during the same visit.

Other pieces of equipment featured in all games, but classified differently, include various throwables and explosives, such as grenades, claymore mines, throwing knives, or decoys, along different kinds of ammunition, including Military Grade Rounds, which are used as currency in the first two games. Weapons can also be customized with various attachments.