Exhibition has other uses. Please see Exhibition (Disambiguation) for other meanings.

VDNKh (Russian: ВДНХ), referred to as Exhibition in the video games, is the northern most inhabited station of the Moscow Metro and the home of Artyom.

VDNKh is a Metro station on the Kaluzhsko-Rizhskaya Line. The station is named for the All-Russia Exhibition Centre, formerly known as Exhibition of Achievements of the People's Economy, or VDNKh (ВДНХ in Cyrillic), which is situated nearby on the surface. Before the war, it was one of the busiest stations in the whole Metro.

VDNKh post-apocalypse is a large powerful station with a stable economy, primarily driven by the production of mushroom tea that is renowned throughout the Metro. This wealth has prevented annexation by Hansa and led to large numbers of entrepreneurs moving to the station in the hope of good business. They also have a large population of pigs, raised for food, leather and waste removal. VDNKh considers itself a very civillised station, with strict laws and rules. It is mandatory to teach children to read and the station has an extensive library, supplied with books from Polis. As a result, the denizens of the station are relatively well fed, watered, and homed, all of the population at least having a tent at night, the more important members having an alcove shelter.

During the events of 2033, VDNKh formed an alliance with Alekseyevskaya and Rizhskaya to the south, connecting telephone cables and lighting in all the tunnels, essentially creating one large unified station. For Alekseyevskaya and Rizhskaya, they are protected from Hansa by VDNKh, the latter helping to patrol the tunnels between, allowing them to protect their own station. For VDNKh, they receive extra man power to help protect the northern tunnels to Botanicheskiy Sad, as well as increased economic influence.

The station has a fairly strong military - in both directions, one tunnel has been collapsed, meaning the number of tunnels needing guard has been halved. As a result, the northern tunnel, to Botanicheskiy Sad, is constantly patrolled, with guards at regular intervals. Every man of age takes a turn guarding the tunnel, thus every man is trained in the use of firearms.

Despite VDNKh's apparent prosperity, in the years leading up to 2033, the station was assailed by the Dark Ones, creatures from beyond Botanicheskiy Sad. At first, the creatures approached the barricaded slowly, frightening the guards, who fired upon them. Later encounters led to the Dark Ones being hostile, initiating psychic attacks on the guards, many of whom often went insane. By 2033, the station was under constant attack by the Dark Ones, with scores having perished in the attacks. The leaders were preparing to demolish the tunnels and abandon the whole line north of Prospekt Mira until the Dark Ones were destroyed by Artyom who launched missiles at their nest in the Botanical Gardens.

Since then, the station appears to have returned to normality, with the tea production returning to normal. Presumably, the alliance with the southern stations was fully cemented and a strong commonwealth created.

VDNKh is known for producing the greatest tea in the whole metro. They make the tea with mushrooms, which serve as a food source when needed. The citizens also raise pigs as a source of protein.

In the video game Metro 2033, the station has many residents, served by numerous facilities and stalls, including an ammunition vendor, a Weapons Vendor, an Armory, a jail cell, and a small farm. As seen during the levels "Hunter", "Exhibition", and "Chase", the station has very good security. Showcasing weapons, several dozen soldiers, (at least), and roadblocks on all tunnels leading into the station, though they are mostly equipped with basic weapons such as Bastards or various shotguns. Although Polis had refused to help Exhibition, Miller, Artyom, and some of the ranger find D6 and used its weaponry against the Dark Ones, taking pressure off of the survivors of Exhibition.

In Metro: Last Light, it's revealed that the threat from the Dark Ones had passed and the life in the station had returned to normal, despite the large casualties caused by the Dark Ones.

In a similar fashion to Metro 2035, Artyom and Anna have left the Order to settle down at VDNKh after the battle for D6. As seen in the opening of Metro Exodus, Artyom regularly travels to the surface in the vicinity of the station. Whilst not much of the station is seen in the opening, it can be surmised that Sukhoi, Artyom's adoptive father, may have been killed during the struggles with the Dark Ones. 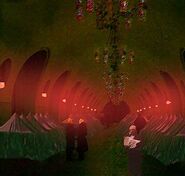