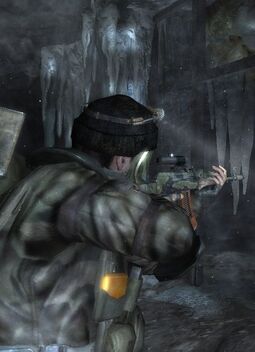 The standard flashlight that almost everyone carries in the Metro comes with all armoured suits, built right into the helmet. Artyom and any armed NPC will have one ready for use. The flashlight can be charged using the Universal Charger, a manual mechanism that charges all minor electrical equipment on the player.

The flashlight is available at the very start of the game and is mainly used to light the way in the Metro. Because Artyom is underground, there are very few sources of light, and he must use a flashlight to brighten the dark areas of the Metro.

The flashlight drains power relatively fast, recorded at 11 minutes and 8 seconds (though 5 minutes and 35 seconds on Ranger difficulty), but can also be manually recharged quite fast as well; the greater the charge, the greater the distance the light can reach. The flashlight is also used to detect ghosts, without a light source, a person could walk right into a Ghost and not know it, as Ghosts' silhouettes only appear when illuminated. In stealth or combat situations flashlight can be both good and bad, using one can help someone see his or her way, but can also be easily detected by anything lurking in the darkness. Turning a flashlight on will alert any mutants or enemies to your presence, so it's best to keep it turned off when in stealth or use Night Vision Goggles instead.

The flashlight shares its power with Night Vision Goggles and they can be charged at the same time, so use them wisely.