Fuel is a type of ammunition found in Chapter 6 of Metro 2033 Redux, in the Developer Pack Dlc for Metro: Last Light (in the Spider Lair mission and the Developer Pack level), and also in the first DLC for Metro Exodus, The Two Colonels. It is used only by the Flamethrower. Before Metro Redux came out, fuel was not considered as ammunition and player had infinite when available (such as when using the mounted flamethrower in the Dark Star mission).

Though the type of fuel is not specified, it appears to be a gaseous fuel, most likely propane - flamethrowers normally use a liquid fuel and do not actually throw flames, but coat the target in burning liquid; the Metro flamethrower is an exception in that it actually does throw fire, hence its very short range. The gas is stored in a tank on the users back and connected to the flamethrower with a hose, where it is ignited with a spark device.

In Metro Last Light and Metro Redux, fuel can be found in three different containers - a red pressurized tank which gives 10 units of fuel when picked up (on Normal difficulty), an angular plastic liquid container and a jerry can (both usually give 3-5 units of fuel when picked up). It should be noted that fuel containers explode when they catch on fire and can't be picked up afterwards, so caution must be used when using the flamethrower or explosives in areas with pickable fuel containers.

In Metro Exodus, fuel is only encountered in The Two Colonels DLC and Khlebnikov can pick it up on numerous occasions and use it with his flamethrower. This time, fuel containers always look like a small red jerry can, similar to the largest magazine that can be mounted to the Flamethrower. Picking up one can can give the player anywhere from 10 (or less) to 200 units of fuel, most often between 50-150 units. However, the flamethrower consumes fuel at a much faster rate than it did in Metro Last Light. Fuel can also be crafted at a workbench, crafting 45 units of fuel costs 10 Chemicals.

A jerry can found in Last Light which gives 3-5 units of fuel when picked up on Normal difficulty. 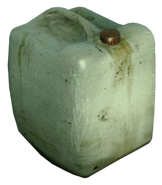 A plastic liquid container found in Last Light which gives 3-5 units of fuel when picked up on Normal difficulty. 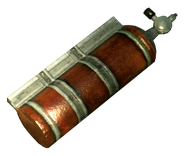 A pressurized tank found in Last Light which gives 10 units of fuel when picked up on Normal difficulty. 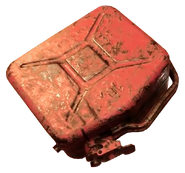 Fuel container as seen in Metro Exodus. Picking one up can give the player up to 200 units of fuel.
Русский
Community content is available under CC-BY-SA unless otherwise noted.
Advertisement