A Geiger counter is a tool that is used to detect and measure ionizing radiation. This device appears in the Metro universe, both in the novels and in the games.

In the Metro Novels[]

In the novels, Geiger counters are widely used on several stations to check the safety of things brought to the Metro by Stalkers. Stalkers also make frequent use of them while on the surface to safely navigate the irradiated landscape of Moscow. Of course, the same is also true for the Universe of Metro 2033 book series. 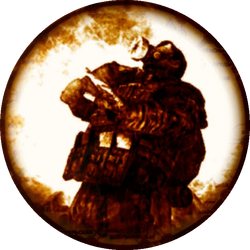 A Geiger counter is in Artyom's possession from the start of the game and remains with him for its whole duration. Out of all the equipment Artyom carries with him throughout his journey, the Geiger counter is perhaps the least used. The tool itself is never seen throughout the game, and is only heard making its iconic crackling sound when Arytom is near harmful levels of radiation. These sources can range from large puddles on the surface to radioactive luminescent mushrooms underground.

Once the crackling is heard, it's strongly advised to move to a safe location as extended radiation exposure will kill Artyom. The faster and louder the crackling, the higher the radiation Artyom is being exposed to. If the crackling is very fast, Artyom will start to take damage; this will happen if he steps into a puddle or wanders too close to a radiation source. The Geiger counter is more useful when Artyom is on the surface, where sources of radiation are more common.

As in Metro 2033, it is never seen, but clicks when near a source of radiation, such as the radioactive gas on the tracks in the mission "Bandits". Once again, if Artyom stays in a radioactive area for too long, he will begin to take damage and eventually die. If the player enters an irradiated area with a gas mask, they will breathe heavier and use filters faster. Since the surface is less radiated than what it was in 2033, players may not notice this equipment even when they own it. A Geiger counter is also used by rest of the playable characters in the DLC missions, and the Redux version.

The Geiger Counter makes another appearance in Metro Exodus, this time as a permanent part of Artyom's bracer. For the first time, the device can actually be seen in the game, and the amount of radiation can be determined not only by its sound, but also by looking at its gauge. Dangerous levels of radiation are in the yellow and red field of the gauge. If the player finds themselves in an irradiated area, they should try to leave it as soon as possible, as higher levels of radiation will eventually kill them and there is no reliable protection against radiation available for use.