Giant Amoebae (singular: Giant Amoeba) are spherical creatures distinguished by their attack - sliding towards Artyom and exploding. Giant amoebae are spawned from the amoeba pore, and can be destroyed by either shooting the pore, or shooting the amoeba itself. These creatures only appear in Metro 2033.

Giant amoebae resemble balls of green-grey-ish sludge with a ball of dark grey substance at its core. They favour swarming towards potential prey, and attack by exploding. Once an amoeba gets close to its prey, it will stop and begin to shiver, while turning red-ish. It will then explode a second or two later. It would seem that the amoeba is not the actual creature, but simply a "drone" sent by the pore to defend it from harm. They are first encountered in the lower levels of D6.

Any weapon can easily dispatch an amoebae with a single hit, yet the quickest and best way to eliminate amoebae is to preemptively destroy the pores as when a pore is destroyed, the amoeba will not spawn from it. It's also recommended to run ahead of Miller and kill the pores before he catches up. This is the best way to dispatch them without having to worry about Miller being killed. Targeting the pore as soon as possible is recommended. It will take exactly eight shots to destroy a pore itself, no matter what it is shot with (even assault rifles with MGRs and overpressurised arrows and ball bearings), so the best option for a quick dispatch is dirty 5.45mm. A fast-firing weapon with stable aim and a large magazine like the Kalash, while the Kalash 2012 or the Abzats are recommended when dispatching the pores; if there is not enough time to reload, switch to another gun to finish off the pore.

In D6, the pores can be shot from the second floor before descending down to the third. Consequently Artyom can run around the inner edges of the pit to get to the end of the path and fight his way backwards back to Miller. If Artyom is fast enough, Miller will not be triggered to go beyond a few steps from the elevator until he comes within a small distance of him, allowing him time to deal with the amoebas at his own pace. Doing either of these is almost mandatory when playing on the ranger difficulties.

Amoebae don't appear in the book. During the second to last chapter of the book, Artyom witnesses dark, grey leather balls as tall as himself, rolling around the surface of VDNKh. These could possibly be some form of amoeba. The location, however, is also the "nest" of a demon, so the balls may be its eggs.

There is also a kind of semi-sentient "sludge" inhabiting the basement and underground station of the Kremlin. This is supposedly the result of biological weapons used at the landmark. This life form, however, uses some form of psychic influence to lure prey into its mass and devour them, rather than exploding. 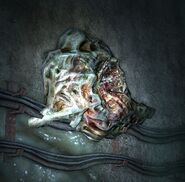