Giulnara "Giul" Khakimova (Russian: Гюльнара "Гюль" Хакимова, Kazakh: Гүлнар "Гүл" Хакiмова - the surname is taken from her mother's surname heard in audiolog) or the Witch, as she is referred to by the Munai-bailer, is a character who first appears in Metro Exodus. She is a native of the Caspian Desert.

Giul was five when the bombs fell and her father didn't make it to accompany her or her mother. She and her mother survived by taking shelter in a communication centre that doubled as a bunker, where Giul's mother worked as a senior researcher. As conditions in the bunker deteriorated, Giul and her mother moved to a lighthouse above the bunker, with her mother only coming down for rations. Her mother perished in the bunker, leaving Giul an orphan at the age of ten. For the last five years, Giul has been engaged in a struggle against the Munai-bailer, a raider group that enslaved her people. The Munai-bailer notes indicate there were originally a lot of resistance fighters against their oppression, including Giul, but with reprisals against their sympathizers and betrayals, all fell one by one, until only she survived.

Giul contacted Colonel Miller by radio offering to help the crew of the Aurora gain access to the communication centre. She was besieged in her lighthouse by the Baron's troops, who had managed to overcome her traps and defenses. Miller agreed and send Artyom to assist her. Artyom killed all the besieging forces. Later, Giul whent inside the bunker, but stopped half way to keep the power online while Artyom ventures deeper inside the complex. Before leaving, she will ask him to bring her her mother's family picture.

After helping Artyom and his group acquire water and fuel for the Aurora (while killing the Baron), she thanks Artyom for giving her and her people hope as she rushes inside the tower and detonates the planned explosives to blow up the Baron's lair, crippling the Munai-bailer heavily.

Later, in the summer, Giul can be heard in a radio broadcast. She takes credit for killing the Baron (when in reality Anna fired the fatal shot with help from Artyom) and invites the freed slaves to the former Baron's tower to join the rebellion against the rest of the Munai-bailer. 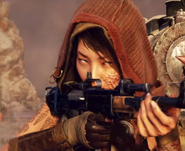 Giul in the trailer

Giul as a child before the nuclear war.

Giul says goodbye to Artyom and continues her war with the remnants of the Munai-Bailer.

Giul holding the picture of her family.