Grenades are improvised explosive devices that were created from scrap by the Metro dwellers at some point after the Great War of 2013. Two very similar variants appear in the game series - a regular Frag grenade and a Sticky grenade, which sticks to surfaces instead of bouncing off.

Grenades seen in Metro 2033 are makeshift pipe-bombs, consisting of a short section of steel pipe, containing the explosive mixture, and closed at both ends with caps. A fuse is inserted into the pipe with a wire running out through a hole in the capped end of the pipe. They appear to be fragmentation grenades as the pipe itself fragments when exploding

There are two types of grenades available to the player in Metro 2033. The first one is a pipe-bomb that can be obtained as early as the Riga station weapon shop and are commonly found. The second grenades functions in the same way, albiet with a bit of a twist; it is 'sticky'. The sticky grenades are bristling with razor-sharp nails that will impale anything they land on and never bounce off surfaces. These are rarely found in the game but can be bought from multiple vendors

Since grenades are generally far from being stable, these makeshift bombs are prone to going off if shot at or if caught in the blast of another grenade, often creating deadly chain reactions when carrying multiple grenades.

The improvised explosive makes a return in Metro: Last Light, with the pipe bomb functioning and looking the same as in Metro 2033, and still easily capable of killing armoured opponents up close. They are best used against mutants, who will not try and avoid the grenades, though their relatively long fuse time and the fact that grenades can't be "cooked" means care must be taken to time the throw correctly. Obviously, they are not suited to stealthy players, but if the player is spotted, they can even the odds and give the player time to adjust.

The different grenades can be thrown by the press of a button (by default, c). This also applies to throwing knifes and mines. The different throwing weapons can be switched between at any time by holding down the "weapons inventory" key (default one is tab).

In the Faction Pack DLC mission, Kshatriya, sticky grenades replace the fragmentation grenades, although they have pretty much the same stats, except obviously being sticky. Aside from slow moving Librarians, they are not much use against the fast moving mutants in Kshatriya - bullets are much better invested in incendiary grenades that, although do less damage, can slow down Librarians long enough for the player to escape. A few can be found throughout the library, but most will need to be purchased from the home base.

Grenades return in Metro Exodus. Their look has been altered, but the function remains mostly unchanged, besides exploding on impact or a very short time fuse if thrown in the air. Throwing animation has been simplified and thus, it takes less time to throw a grenade. Grenades are now much more valuable, as they are only very rarely found in the world and are fairly expensive to craft, one grenade costs 30 mechanical and 15 chemical materials to produce and can only be created at the workbench. It means that the player shouldn't just waste their grenades on any target, but should instead save them for the toughest of opponents, or especially difficult fights with large groups of enemies. By default, Artyom can carry 5 grenades, and with Throwable carrier vest upgrade, this number is increased to 10. 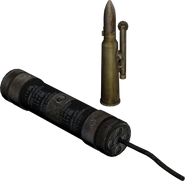 An unused grenade model with Artyom's lighter in the background.

A Sticky Grenade, found in Kuzmich's shop in Kshatriya. 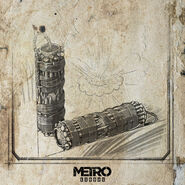 Picture of the Grenade from Artyom's diary.
Deutsch Русский
Community content is available under CC-BY-SA unless otherwise noted.
Advertisement