The Heavy Automatic Shotgun, or Abzats, is a makeshift firearm in Metro 2033 and Metro: Last Light. It's one of the more powerful non-explosive weapons in terms of concentrated damage. It resembles (and is derived from) a cut-down DShK 12.7mm machine gun, re-chambered and re-bored for shotgun shells, and completely redesigned to be wielded by one user. The weapon is only made available in-game by purchasing the Ranger Pack for Metro 2033 or Last Light's Season Pass. In the Redux version, it is a rare but obtainable weapon.

After the war, Andrew the Blacksmith obtained a wide variety of old pre-war guns that were in barely-serviceable condition and set about making them useful. One of these projects was finding a use for the DShK 12.7mm machine gun, which, being quite old, was comparatively easy to come by in the industrial areas above-ground. As the DShK's 12.7x108mm rounds are extremely hard to come by, Andrew went about refitting the barrel to accept shotgun shells.

Very little needed to be changed for the Abzats; with the gun already designed for very large and powerful rounds, he did not need to make big changes to the firing mechanism to accept smaller shotgun shells. The end result was a powerful close-combat weapon well-suited for handling the biggest threats found in the Metro, especially against hordes of mutants. The design, however, was also quite bulky and expensive, ensuring that only a few in the Metro could actually afford them and that other designs remained more popular. The weapon itself had problems. Like its machine gun parent, it is very heavy, weighing more than twenty pounds despite steps taken to reduce its weight.

The Abzats is the most powerful weapon in terms of concentrated damage in the game; no enemy can take a full belt of ammo from it, even with less-than-optimal hits, and survive. Its large ammo capacity gives it an advantage over the Shambler and Duplet, and its rapid fire rate overpowers the advantages of the bayonet attachment and rapid follow-up shot ability of the Shambler or Saiga-12. These traits make the Abzats a powerful weapon for close-quarters combat, capable of gunning down entire swarms of mutants without having to reload. In Metro 2033, its alternate fire allows Artyom to fire the weapon semi-automatically in order to save accuracy and reduce recoil; in Metro: Last Light, this was changed to a rapid 5-shot burst requiring a brief cool-down period.

Despite its power, the Abzats has some drawbacks. It is the weakest shotgun in terms of single-shot damage and it has the shortest effective range. While shots fired from the Abzats do not spread as much as the Duplet, the spread pattern is more random and cannot be compensated for, but saturates a much larger area than the single shot action. The main drawback is that the Abzats will consume shells about as fast as the Kalash 2012 consumes 5.45mm rounds when fired on full-auto. Because it uses such costly ammunition, the Abzats can become an expensive investment. The Abzats also has a lengthy reload time, regardless of how many shells are used. It is recommended that the area is clear before reloading. Furthermore, the player's movement speed is decreased when both walking and sprinting, due to the heavy weight of the weapon. 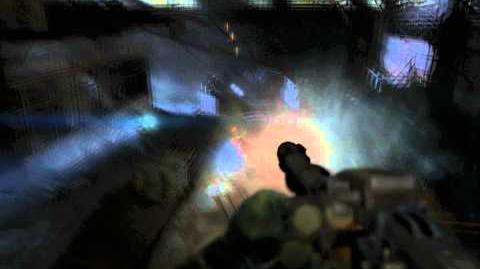 While the Abzats offers unrivaled punch at close-range, it must be used effectively and carefully or it will quickly consume ones supply of shotgun shells. With this in mind, it is imperative to collect as much shotgun ammo as possible by finding it in the field and trading unused ammo types to buy more from vendors. Playing on Ranger difficulties eliminates crosshairs and encourages the use this weapon when facing pack enemies, like watchmen and nosalis, or single strong enemies, like librarians; otherwise, it is a waste of ammunition.

Even if one does not intend to use it, the Abzats is worth obtaining due to its high trade value: Exchanging it for a Duplet gives a net total of 58 military-grade rounds. It can also be traded for other guns at Armory or Hole stations, or the trader at the end of "Quarantine"; this can lower the price of a scoped Helsing to 82 MGR.

In Metro: Last Light, it's still a powerful weapon and now semi-automatic by default. It can be upgraded with a muzzle brake (reduces recoil), an autofire adapter (increases rate of fire, enables automatic operation), a laser sight (increases hip fire accuracy), and an extended magazine (doubles ammo capacity).

The heavy automatic shotgun is a promotional weapon, requiring a download code to obtain. Once the code is redeemed, there are several chances to obtain the weapon. Note that for the weapon to appear, you will need to be logged into Xbox Live. You can, however, obtain the shotgun, disconnect, load the save and still have it in your inventory. The code could be obtained through pre-ordering the game or purchasing the "Special Edition" from Gamestop. PC gamers who have bought the game through Valve's Steam service will find that the weapon is included in the purchase as it counts as part of the free DLC. The Abzats is also available in Metro 2033/Last Light Redux.