The Heavy Trooper is a type of enemy that appears in Metro: Last Light and Metro Exodus. Multiple factions have their own variant of heavy troopers which differ in their equipment and weaponry, but all variants are slow and heavily armoured soldiers, most often used to break through enemy lines, hold key positions, or crush besieged foes.

Heavy troopers are always slow, heavily armoured and use heavy weapons, such as the flamethrower or Gatling. They usually serve a role of a "mini-boss", as killing them usually triggers an event which is required to progress further.

Heavy troopers first appear in Metro: Last Light. After Artyom returns from the surface back to the Moscow Metro in one of the missions, two heavy troopers armed with flamethrowers hold off the mutants pursuing Artyom while the airtight door closes.

Another heavy trooper appears in the last mission of the game, "D6". This time, it's a Red Line trooper that carries a flamethrower and is supported by a group of soldiers carrying bulletproof shields. Artyom has to kill the heavy trooper before he gets too close to the defending Rangers. In order to do this, the shield unit has to be taken care of first. One way of doing this is by using the Preved to hit the soldiers through their shield visors, or simply hitting the shields directly, which will sometimes knock the soldiers back, breaking a hole in the line of shields and making it possible to hit the soldiers hiding behind them. Once the shields are down, the heavy trooper is fairly easy to kill using the Gatling and some grenades.

Heavy troopers appear again in the Heavy Squad mission, which is a part of Faction Pack DLC. The playable character, Hans, is a Fourth Reich heavy trooper who has to hold the line against Red Line attackers. Enemy heavy troopers appear in this mission as well, being very similar to those found in the last campaign level.

Heavy troopers appear in two Metro Exodus chapters as well. The first one is encountered in Yamantau. It is a Cannibal wearing heavy armour and using a Gatling. This enemy deals tremendous amounts of damage when he catches Artyom in the open, so using cover and trying to flank the heavy trooper or using grenades and Molotovs is recommended. Some parts of the heavy trooper's armour can be blown off and hitting the same spot again deals increased damage, so try to focus fire in one spot (preferably the head). They cannot be knocked out or stabbed from behind, making a stealth approach ineffective.

At least three Munai-bailer heavy troopers are encountered in "The Caspian". The first one is a part of the attack group sent by the Baron to attack the Aurora after her crew steals a tanker truck full of water from the gangsters. Another one is encountered on a wrecked ship which serves as a prison for slaves. This particular heavy trooper can be avoided entirely, but visiting the ship and freeing the slaves grants Artyom positive Moral Points, so it's a good idea to clear this area working toward the good ending. The third heavy trooper appears in the final firefight on top of Baron's fortress and has to be killed in order to trigger the final cutscene.

Heavy troopers also appear in The Two Colonels DLC. OSKOM heavy troopers can be seen during the riots on Sibirskaya, trying to hold the rioters off by any means necessary, even by using flamethrowers against them. 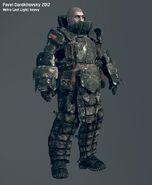