The Hellbreath (Russian: Рельса, literally "Rail"), or Volt Driver in Metro 2033, is a metro-made, portable electromagnetic accelerator that uses the Lorentz effect to fire metal projectiles at extremely high velocities. The Hellbreath is considered the electrical counterpart to the Tihar.

Miller is the only character that uses the Hellbreath, starting in the chapter "D6", and is made available to Artyom in the Ranger Pack DLC. It's also available for Metro 2033 free on Steam. The Hellbreath was a cut weapon in Metro: Last Light itself, but it returned in the DLC. In the Redux version, the Hellbreath is included as an obtainable but rare weapon.

The Hellbreath fires metallic ball bearings using electromagnetism; the gun's magnetic rails are powered by the charge from a built-in battery, and magnetic coil. Unlike the Tihar, which is pneumatic, the Hellbreath has to be charged using a built-in charger. The charger is separate from the one that is used to power Artyom's flashlight and night vision goggles. As with Tihar and Helsing, this weapon needs to be charged when found.

The Tihar and Hellbreath have rather similar performance statistics, and are quite similar in utility. The key differences are that the Hellbreath does more damage when fully-charged, fires slower, and has better sustainability (lesser-charged rounds from the Hellbreath still do fairly good damage, as opposed to the Tihar, which tends to do poor damage unless pumped up). The Tihar, however, has considerably better accuracy (especially over a distance), is silent (the Hellbreath has an extremely loud and distinctive report), and access to a zoom scope (which makes it a very effective sniping tool). In contrast, the Hellbreath lacks any sighting in general except for a laser sight. In general, the Hellbreath is better at closer range, whereas the Tihar is better from afar, though both weapons can work just fine at close range (if the Tihar is pumped and uses its fast fire rate) or long range (if Artyom has the time to aim the Hellbreath) in trained hands. Unlike the Tihar, the Hellbreath is not a suppressed weapon, avoid using it in stealth situations if wanting to remain undetected. 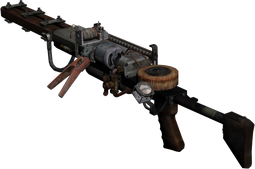 In addition to its high firepower, the Hellbreath can make melee attacks by shocking enemies with the electrified rails at the front of the weapon's barrel. While this consumes energy (and becomes notably less effective the lower the Hellbreath's battery is), it makes for an effective deterrent up-close and is quite good at forcing close-combat enemies back, such as nosalises. At full charge, the Hellbreath allows up to five melee attacks before it requires to be charged. It can fire a total of 17 ball bearings from full charge (including super charge) before a recharge is necessary.

The Hellbreath is one of four guns (others being the Tihar, Revolver, and Helsing) recommended for a Ranger Hardcore playthrough.

The laser sight makes up for the loss of the cross-hair, and the Hellbreath uses the same inexpensive ammo the Tihar uses. All in all, both offer considerable advantages and can be worthy guns in every respect.

The Hellbreath gains a few more advantages over the Tihar in Metro 2033 Redux. Like the Shambler, it loses the special melee attack in exchange for the ability to aim down sights. The Hellbreath is the only weapon in Redux capable of using a 4x sight, putting its sniping capabilities above those of the Tihar with its superior damage and zoom. However, the Tihar remains the superior weapon for stealth.

The Hellbreath has two distinctive, boxy prongs on the front of the gun - each of these contains a full set of magnetic strips, tentatively called rails.

The Hellbreath has three attachment slots: Optics, Base, and Misc. Six different attachments are available for the Hellbreath: three Optics, two Base upgrades and one Misc (a laser sight).

In Metro Exodus, the Hellbreath is not a unique weapon, but a heavily modified Tihar. It is only available during the Dead City level. After Kirill informs Artyom and Miller about the SatCom centre, Miller will let Artyom take his volt driver.

Hellbreath can effectively be used in any situation except ones that require stealth or where there are many weak enemies, such as amoebas. It is also suggested in Ranger Easy and Ranger Hardcore difficulties as the damage increase makes body shots an instant kill on everything except librarians. Its laser sight and easily visible magazine capacity negates the HUD removal disadvantage of hardcore mode. Its firepower does decrease after each shot, so recharge the battery after each fight or if in a stealth situation and have time, charge after killing an enemy. In hot situations, retreat to charge the weapon if it loses power to kill opponents in singular shots. Like the Tihar, the Hellbreath will make sound while fully charged but it will be sparks instead of air leaking out

In the DLC for Metro: Last Light, it proves useful in killing heavily armoured troops found in many of the levels, and is the player character's only mean to counter snipers.