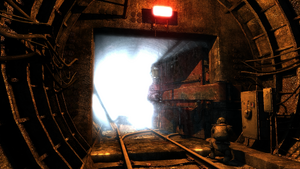 A Hermetic Door is a device used by Metro stations to allow, or deny, access to their stations from the surface. All doors in the Metro can be hermetically sealed, but the ones directly referred to as hermetic doors are always the entrances to the Metro.

Before the apocalypse, hermetic doors were built directly into the Metro when it was constructed. They were generally made of thick steel or concrete and were shut electronically, though could be manually shut if there was no power. Generally, they were always open to allow public access into the Metro, but in the event of an emergency, such as nuclear war, they could be sealed shut for protection. The Metro tunnels also have large hermetic doors that can be used to isolate individual tunnels. When properly shut, they create an airtight seal, preventing radioactive, biological, and chemical contaminants from entering the area, fulfilling their secondary use as bomb-shelter doors.

The doors were finally used for their original purpose - to seal the Metro. When the air-raid sirens sounded, thousands fled to the Metro for shelter. Once the quota for people was met, the doors were sealed permanently, leaving millions of Russians on the outside to face the bombs.

Ever since the end of the world, many stations keep their hermetic doors permanently sealed, to stop anything, or anyone, from the surface into their station. They generally serve their purpose well and nothing can breach them. Other stations that regularly have stalkers passing through, like Polis and Theatre stations, keep theirs unlocked, though closed when not in use, and always heavily guarded, as seen by the two flamethrower troopers at the end of "Echoes".

However, despite the sealing of the hermetic doors in occupied stations, mutants have found their way into the Metro through unlocked, missing or damaged doors. The most notable of these is the hermetic door of Botanicheskiy Sad, the closest station to the botanical gardens, which was opened by Artyom and his two friends, Vitali and Eugine, when they were children, eventually allowing the Dark Ones access to VDNKh and the Metro as a whole. Artyom keeps this to himself, for he knows he would be executed for allowing the Dark Ones into the Metro, although Hunter knows the secret, but doesn't tell anyone.