The Huliaipole Republic (Russian: Гуляй-польская республика) is an anarcho-communist faction of the Moscow Metro. They are mentioned in Track Marks, appears in Dark Tunnels and Ghost Station, as well as being featured on the map of Metro 2035.

This anarcho-communist faction formed some time during the early 2020s after Mikhail Voikov, a former high-ranking general originally from the Red Line, and a group of his followers that were loyal to him, had a major falling out with Secretary General Andrey Moskvin and his associates, whom they considered traitors to the revolutionary ideals. As a result, Mikhail and his loyal followers renounced the Red Line and its Stalinist ideology in favour of anarcho-communism, establishing a commune across three stations at the north end of the Zamoskvoretskaya Line.

Voikov and his followers migrated to Voykovskaya station, which they eventually renamed Huliaipole. It is the main base of this faction, while Vodny Stadion serves as their cultural centre, and Rechnoy Vokzal functions as the farm station of the Republic. Together, these three stations form an anarcho-communist community known as the Huliaipole Republic.

The republic is guided by Mikhail Voikov, who took upon the pseudonym "Nestor" for himself after having been told often by his fellow anarchists that the way he led and coordinated raids or attacks against the Red Line, before turning against Hanza during the Hansa - Red Line War, was very reminiscent of the Ukrainian revolutionary Nestor Makhno, who - with his loyal Black Army - led an insurrection against the Ukrainian nationalists and the Soviet Bolsheviks, in an attempt to establish a free territory in Ukraine (it existed from 1918 to 1921).

The anarchists hold the anarcho-communist philosophers Pyotr Kropotkin and Mikhail Bakunin in very high regard, along with having all of their books, which they were able to obtain by sending stalkers out to the Great Library.

Anatoliy Tomski, the protagonist of Dark Tunnels, hails from the Huliaipole Republic. In the book, he leads a squad of soldiers from Voykovskaya station on a special mission given to them by Nestor.

The anarchists have a large number of soldiers and stalkers, as well as impressive weapons reserves. Despite the fact that there is a lot of gangster "rabble" at Voykovskaya, Nestor is able to easily rally everyone together by instilling iron discipline among his fighters with his oratorical speeches. The anarchists often organise military campaigns, most of which are led by Nestor himself. As a vehicle, the Fellowship has motorised railcars called “carriages” with Kalashnikov light machine guns mounted on them. 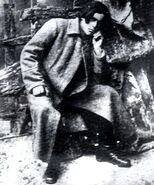 Nestor Ivanovych Makhno (picured in 1918), Ukrainian anarcho-communist revolutionary, is the ideological father of the Huliaipole Republic 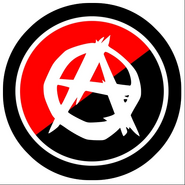 The red and black diagonal colours are often seen on the flags of anarcho-syndicalists and anarcho-communists
Русский Українська
Community content is available under CC-BY-SA unless otherwise noted.
Advertisement