Hunter has other uses. Please see Hunter (Disambiguation) for other meanings.

Hunter (Russian: Хантер, literally "Hanter") is an experienced Ranger and old friend of Sukhoi, possibly due to a pre-war friendship. A key part of the story, he entrusts Artyom with a mission to save the entire Moscow Metro.

As a ranger, Hunter is high-ranking and one of the best the Order has to offer, being trusted enough to traverse the surface alone with heavy gear. Hunter lives by his codex of: "If it's hostile, you kill it". He vehemently supports trying to counter the threats that could destroy the entire metro system. When the Dark Ones begin to attack Exhibition, he travels to the station. He seems to be well known around VDNKh and by Artyom, whom he hands a postcard with the Statue of Liberty on it upon his arrival at the station.

His arrival sets into motion the storyline of the novel and the video game. At the end of his titular level he goes after the Dark Ones that attacked the station. He tells Artyom that if he is not back by morning, Artyom must take his ranger token to Melnik in Polis and report the current situation at Exhibition. He does not return, and thus, Artyom's journey begins.

Hunter's fate is currently unclear in the continuity of the video games. He may have been killed, or he may have been taken by the Dark Ones as he is seen by Artyom during the Dark One's mind game in "Ethereal". However, this is only speculation. In Metro: Last Light, Khan mentions that Hunter is M.I.A. (probably because no body was found). It's likely that Hunter survived in the video game continuity as he is one of the protagonists of Metro 2034. 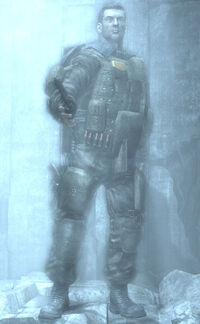 Hunter is seen a couple of times in Artyom's visions as it can be understood that Artyom sees Hunter as his mentor.

He can be seen gunning down a Dark One that pushes him down, during the mission "Chase", after Artyom collides with its ghost. This means Hunter likely killed it while entering/leaving Exhibition, and it is infinitely reliving its final moments. Being a ghost and still able to create telepathic visions for Artyom to see shows how powerful the dark ones telepathic abilities are, able to still be aware and project themselves in visions, even when dead and in limbo.

Near the end of the game, as Artyom is running through a bizarre vision while trapped by the dark ones, he hears Hunter's voice and runs towards him. As he reaches Hunter, he falls, when he turns over, a very bright light shines in Artyom's face, then Hunter emerges from the light and says: "If it's hostile, you kill it", he then throws a revolver to Artyom. Artyom uses the revolver to shoot the Dark One. 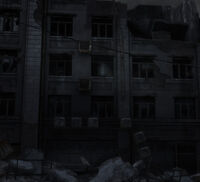 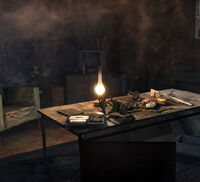 There is a ranger hideout in a crumbling building on "Dead City 1" above a haberdashery shop, to the right of stairs leading to "Dead City 2", that apparently was frequented by Hunter and other rangers. This area is not suitable for staying for a long time as the room is exposed to the surface and need a gas mask to survive. There is a tape player on the table that has a recorded message from him. This tape was recorded approximately a few days before the invasion of the dark ones while Hunter and possibly other Rangers, on account of his transmission, was heading to Exhibition in response to the frequent Dark One attacks.

"Red, I took the heavy gear with me and went north to Exhibition. They are having huge problems with our old friends. If I'm not back in a couple of days gather our men and tell the Colonel. Good luck."

Listen to that quote:

The message can be only played once. Activating the tape recorder again will play an instrumental song known as 'Market'.

In Metro: Last Light, it can be seen that Artyom transferred all his old postcards in his new room in D6. The Statue of Liberty postcard that Hunter gave to him is there too, alongside Hunter's ranger token from the first game.

In Metro Exodus Artyom is saved from taking a bullet by Hunter's ranger token, which he had started wearing.

Hunter appears on the following levels (note that in the levels after Hunter he only appears in Artyom's visions):

He is only mentioned in Metro: Last Light and Metro Exodus.

In the Book Series[]

Hunter is depicted as a man with a bear-like frame. It's also noted that he has animal-like instincts, doesn't need much light, and has great hearing.

Artyom first meets Hunter after returning from guard duty. He then sees Hunter again as he talks with Sukhoi about the Metro's fate. Later that day Hunter asks Artyom to meet him near his tent and offers the young man an exchange of secrets. Artyom tells Hunter of his childhood expedition to the Surface and its outcomes. Hunter seeks to close the barrier, and goes after the Dark Ones that attacked the station. After not returning, he is considered missing, and Artyom begins on his journey to Polis per Hunter's request.

The encounter with the Dark Ones "broke" him by showing him his true colors: how savage and rotten he had always been as a human and how he used his position of a ranger to quench his thirst of blood. Unfortunately by showing him his "real reflection", the dark ones had awaken the evil within him, that didn't subdue but started to consume him. The man fled from them and avoided people, feeling remorse and fear of his new self. Hunter also started to hurt himself as a form of self-punishment for whom he had been and had become.

The ex-ranger appears one year later at Sevastopolskaya Station, where he took the role of brigadier - from that time he's mostly called that way by others.

Hunter is distinguished by his unnatural craving for violence and blood along with his badly scarred face. He barely talks and it is impossible to reason with him - once he sets his mind on the task he would do everything to complete it.

As Sevastopolskaya Station is set upon by an unknown danger, he declares himself to solve the station's problem along with Homer and Ahmed whom he choose as his helpers.

Soon, Ahmed is killed by a monstrous mutant at Nagornaya Station. Not much later, Hunter and Homer arrive at Tulskaya Station to learn that all caravans are stuck at it due to an unknown disease - a combination of plague and rabies. Hunter, having no other choice, decides to go to Polis to get reinforcement troops and flamethrowers to cleanse the whole station - again dragging Homer along.

After witnessing an inundation of Tulska Station, he settled down at Sevastopolskaya, where he, once more, took the role of brigadier.

It is worth noting that throughout the book Metro 2034, Hunter develops an interesting and unusual relationship with a much younger female called Sasha. As the girl develops feelings for the cold ranger who has become a dark, broken shell of his former self, Hunter fails to return a sentiment of the same type. This continues throughout the story of the novel, with only a few exceptions of where Hunter shows more human emotions. Near the end of the book, during Sasha's death, the former ranger finally reveals that he has begun feeling similar emotions of (unusual) 'love' towards his female companion, by shouting at his dying partner that he "needs" her. However, by then, it's too late and Sasha is just about to die.

Hunter is mentioned as being alive by the time of the events that take place in Metro 2035, but he does not play any role in its story. Sasha, however, reveals that Homer greatly romanticized Hunter's personality in his book. In actuality, Hunter was a chronic alcoholic. Sasha describes him as carrying a flask in one hand and a Stechkin pistol in the other, and often being barely able to walk straight.

In the Book Series[] 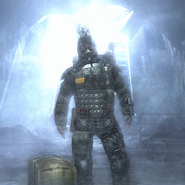 Hunter at the gate in Exhibition (VDNKh). 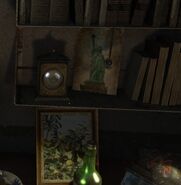 Hunter appearing in a dream of Artyom's

The same dog tag held up by Anna, after she discovers it saved Artyom's life by stopping a bullet fired at him from up close.
Deutsch Español Polski Русский Українська
Community content is available under CC-BY-SA unless otherwise noted.
Advertisement