The Kalash 2012, or AK-2012, is a fictional next-generation Kalashnikov assault rifle that had been introduced by the Russian army a year before the nuclear war that drove humanity underground - as such, it's fairly uncommon, as most soldiers still used the AK-74M, with the 2012 being reserved for special forces.

Although the Kalash 2012 is substantially different to the real life next generation series of Kalashnikovs, the AK-200 series that were presented after Metro 2033's release, it bears some similarities to some existing firearms. The general shape and magazine placement are very similar to that of the FN Herstal's P90, a PDW class of weapons designed in the early 90s. While the gas system, muzzle brake and the iron sights resemble those of the AK series of rifles. It is basically a hybrid of the Kalashnikov rifle and FN Herstal's P90, based on how it looks.

The Kalash 2012 is one of the weapons in the Metro that predates the war and it is highly prized. Since the Kalash 2012 is a primary weapon, it can use both dirty and MGR 5.45x39mm cartridges.

The very first Kalash 2012 in the game is available for purchase in the shop located at the Polis Station customs and is, in fact, one of the only two scoped and suppressed variants of the weapon present in the game.

The Kalash 2012 is one of the best rifle weapons in both games. It is as accurate as the VSV while fired in bursts and its fire rate is roughly equal to that of the Bastard. The weapon's magazine is also mounted on the top of the receiver, rather than the bottom like most weapons, making it easier to keep tabs on the ammunition count when playing without a HUD. The weapon, however, is only found during the later portions of both games.

Its high rate of fire and middling accuracy makes it unsuitable for conserving ammunition, but can be alleviated by firing the weapon in short bursts outside of close combat. The weapon's reload time is also longer than that of the Kalash. Despite this, the Kalash 2012 is still one of the best weapons to use in the confined tunnels of the metro, where its weaknesses are less of a concern. 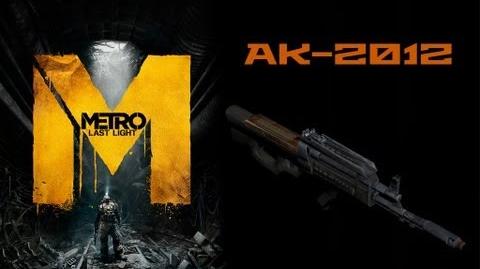 Like some returning weapons, the Kalash 2012 has become one of the most versatile weapons in the player's arsenal in the sequel thanks to the new attachment system.

It accepts a suppressor and is available as early as Sundown level, which makes it invaluable for stealth throughout the game. You can purchase it in level Undercity and onwards, this gun is not available in Depot level.

It can accept reflex, IRNV, and 2x optical sights making it useful for both close and long range combat. It can accept silencer like VSK-94 and AK-74M.

Like Metro 2033, as with all weapons that use 5.45x39mm ammo, the Kalash 2012 loaded with MGRs is capable of killing almost anything with a single shot on higher difficulties. Its high rate of fire, however, is not very useful for conserving ammunition, which means that in this game the ammunition Artyom can carry is limited, it would be wise to pick a weapon with a lower rate of fire. But in close quarters, you will have an edge over your opponents wielding a weapon with a slower fire rate. The Kalash 2012 is rare in the game, and is frequently not chosen by players. This is in part due to the comparative firepower of similar weapons like the RPK-74 and Saiga-12, which are available before the Kalash 2012 is even introduced in game. However, due to the RPK, Saiga and Abzats inability to accept the silencer, its might be a good idea to get the Kalash 2012 if the player's build is heavily based on stealth.

The Kalash 2012 has three attachment slots and five available attachments in total. Unlike the regular Kalash, this weapon can't equip Extended magazine.

In Metro 2033 Redux, the Kalash 2012 remains as the best assault rifle in game, although it is still not available until the later portion of the game, the new customization system allows the user to make the Kalash 2012 more suited to their play style.

Kalash 2012: Although sporting a new model slightly different from Metro 2033, this gun has not changed much (except for a ambidextrous ejection port for spent casings). It has higher accuracy at the cost of losing the default laser sight. The weapon's lower damage output versus the other assault rifles makes this weapon less useful versus mutants, and its 40 round magazine capacity is negated by the fact that most other assault rifles can be upgraded with extended magazines. The weapon is still very effective against humans and is encountered early enough in the game to see considerable use. Because the weapons with more firepower are introduced early in the game, the Kalash 2012 is not common even among NPCs.

The Kalash 2012 is an interesting concept for a next generation assault rifle, but is a fairly implausible gun from an engineering standpoint. The weapon has multiple substantial design issues, which are the following:

In-game Kalash 2012, as seen from the first person perspective in Metro: Last Light.

Cut variant of the Kalash-2012 with scope

First person view of the weapon.