Primary protagonist of Majka's second novel in the series, The Promised Human

Lieutenant Kamila Czapnik (Polish: Porucznik Kamila Czapnik) is a 23 year old soldier of the Stronghold in Tyniec, west of Kraków. She is the leader of one of the platoons stationed there, trained in warfare by veterans from before the nuclear armageddon. Kamila is the protagonist of The Promised Human and one of the strongest female characters in the entire Metro Series.

When hell on earth became a reality during the short World War III, Polkovnik Mawte - at the time much lower in rank - was one of the lucky few soldiers to have access to a military jeep. As Kraków turned into a nightmarish place of chaos in the immediate aftermath of the nuclear bomb being dropped to the east of the city, prior to evacuating Mawte rescued a 3 year old child from a crashed bus in the middle of a warzone. That little girl was Kamila, whom he adopted and raised, training her in the art of war. She grew up to become the leader of the 6th Airborne Brigade's most valuable post-war platoon, known colloquially as "The Dead" (Polish: Umarli).

As they grew in fame and strength in the Tyniec Stronghold, Kamila's 4th Platoon espoused a new ideology. Believing the errors of their ancestors to be the cause of humanity's downfall, Kamila saw the stubborn attachment of her superiors to the ways of the past as a foolish decision that would ultimately lead to the destruction of their society. She gave her platoon its new name and introduced different rules, as each member had to undergo an initiation test and revoke their sentimentality to the pre-war times. As they symbolically "died", they were born again and branded to mark their transformation.

Kamila meticulously planned out to peacefully overthrow the authority of General Skrobosz and Colonel Mawte, but in the end failed, which resulted in her being sent on a suicide mission to find the Source of the telepathic unanimity beneath Wawel and annihilate it. She is joined by the trusted soldiers of her 4th Platoon, among them are: Corporal Dalia (the medic and cook of the group, always fascinated with slicing up radioactivity's fleshy new creations), Łukasz "Spajor" (who loves to distill his own vodka and is never seen without a cigarette in hand), and various others. On her journey she is joined by Marcin and the Russian stalker "Wesoły", characters from The Promised District.

As a leader Kamila is strict yet fair, she is clearly compassionate towards her troops and cares for them as comrades - brothers and sisters-in-arms. However, she is also more empathetic than many military leaders, which can be seen as an asset. One of her weaknesses is the abundance of confidence in her own abilities and that of her subordinates. On a physical level, she has been described as an attractive and athletic woman who could put most men to shame, thanks to her rigour and combat skills. 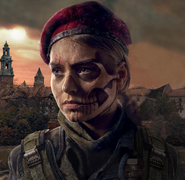 Full view of the artwork
Русский
Community content is available under CC-BY-SA unless otherwise noted.
Advertisement