Kyiv or Kiev (Ukrainian: Київ, Russian: Киев) is the capital of Ukraine. It's also the largest city of the country and is mentioned on the level "Market" in Metro 2033. It has a population of over 2,500,000. It is one of the oldest cities in Eastern Europe (founded around the 9th century), as legend tells it was founded by three brothers: Kyi, Shchek, Khoryv, and their sister Lybid. Kiev rests on the Dnieper River.

In the Metro Series[]

It has a total length 65.18 km when all three lines are combined and it carries an average of 1.422 million passengers daily. It shares the same architecture as that of other metro systems that were built in the former Soviet Union. It was the third metro system to be built in the Soviet Union, with the first being St. Petersburg and Moscow.

By the year 2033, the enirity of the Obolonsko–Teremkivska and Syretsko-Pecherska Lines consist of independent stations that are able to function relatively fine with food, water, supplies, etc. All of the independent stations on both lines co-exist peacefully amongst themselves, however the inhabitants of both lines do not know the status of the Sviatoshynsko-Brovarska Line because it's isolated from the rest of the Kyiv Metro with all of the surface entraces/exits for the stations on the Sviatoshynsko-Brovarska Line having been destroyed during the nuclear war.

Due to it's isolation, various unusual societies have formed at most of the stations of the Sviatoshynsko-Brovarska Line that are unlike those of the independent stations in the rest of the Kyiv Metro. 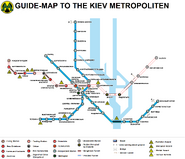 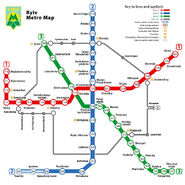