Leader of his Group

Klim (Russian: Клим) is the main antagonist of Sam's Story DLC in Metro Exodus. He is Tom's second-in-command.

Klim worked for Tom's arms company before the war, handling connections in Russia. After the bombs fell, he continued serving Tom as his second-in-command and commander of his personal armed forces. It was Klim who was largely responsible for quelling Vladivostok's bandits, doing so through brutal means. It 's also implied that the strict enforcement of rules and draconian punishments in Tom's group is largely Klim's doing, as a fishermen on the Vladivostok docks can be heard telling an alleged informer to run off to Klim so he can disappear like the last several people critical of Tom.

Klim is first seen in Tom's office aboard the nuclear submarine, and is introduced to Sam as Tom's right-hand man. When Tom makes a deal with Sam which would see the latter find the Captain and negotiate his cooperation, Klim offers Sam his best men to accompany him, but is declined. On Tom's orders, Klim tunes Sam's radio to the group's frequency, so he and Tom can keep in contact. When Sam leaves, Klim can be heard arguing with Tom.

During his negotiations with the Captain, Tom offers to eliminate Klim to put the Captain's mind at ease, as his services will no longer be necessary with the submarine operational. The Captain reluctantly agrees with this.

Later on, Klim betrays Tom and organizes a rebellion, revealing that he knew Tom was planning on getting rid of him. He also mocks Tom's ideas for rebuilding civilization, and insists no one will be afraid of his nukes if he is unwilling to use them. Klim, on the other hand, reveals that he already has several targets in mind. Sam is tasked with getting to the control room and opening the gates, but must fight through Klim's men to get to it. At the control room, he corners Klim, but refuses to outright kill him and insists that he must answer for his crimes. When Sam opens the gates, Klim attacks him with an axe. During the struggle, Klim stabs Sam and begins choking him to death, but Tom and the Captain ram the control tower with the sub, shattering a nearby window and allowing Sam to stab Klim in the neck with a shard of glass. Despite his injuries, Klim lunges at Sam and briefly grabs hold of him as he tumbles out the window, but drops into the sea soon after.

Klim strangles Sam with his Kalash.

Klim is stabbed in the neck with a glass shard.

Kilm falls to his doom. 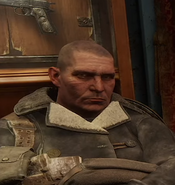