Kshatriya has other uses. Please see Kshatriya (Disambiguation) for other meanings.

Retrieve the 30 artifacts on the surface

Kshatriya is the second level added in the Faction Pack, and is not only the longest of the three - but the single longest level in the Metro video game series, at least up until Metro Exodus which mostly has open-world levels. Unlike most levels, which have Artyom travelling from point A to B or battling a foe, Kshatriya uses new mechanics, such as open world scavenging, to emulate the act of stalking - venturing up to the surface to retrieve artifacts of the old world.

Kshatriya puts the player in the boots of a supposed Ranger Trainee from Polis, attempting to prove himself as being worthy of being amongst the warrior class of Polis: the Kshatriya. He begins by first meeting up with the Kshatriya Team that is there to help him when he begins to scavenge the area of the Great Library above. Following a short conversation with the base's arms and equipment dealer, Kuzmich, the Trainee meets with Shaman, the artifacts collector. Shaman will instruct the trainee to hand in any of the artifacts that they find on the surface to him in exchange for varying levels of cash rewards.

Following this, the trainee may leave for the sewers that connect with the surface. Along the way the trainee will meet Bar and Su, twin Stalkers of his team who provide occasional help in combat and tips on how to survive the level. After the meeting, the player is left to their own devices to explore the slowly opening world of Kshatriya.

Gameplay in Kshatriya is drastically different than that of what can be found in the main campaign of Metro: Last Light. Aside from finding all 30 artifacts listed on Shaman's electronic drawing-board, including the "Map of Secret Metro", there is no goal, so the player is free to explore the large map at will. While seeming rather small to begin with, certain parts of Kshatriya must be unlocked by exploration to proceed further into. The sewers, seemingly a hallway or two, rapidly becomes a crossroads leading to various parts of the surface and the Great Library. The save checkpoint must be done manually rather than automatically given at random intervals or when the player acesses new areas like in the main mission game. To save the progress, the player must return to the Stalker base and use the door located to the right of Kuzmich's wares to enter Polis station. Here the Trainee will rest with progress being saved. Note that in the beginning you can't save the progress until you got the first artifact or have visited the surface. The checkpoints are entirely optional, some players find extra thrills in refusing to enter the station until when it is required at the very end. If you want to finish the level quickly, you will return to the station quite often, your backpack only fits 5 artifacts, so you have to return at least 6 times to return and handover your findings to Shaman.

Unique to Kshatriya are semi-randomized encounters, mostly with enemies, but also with artifact placement, that lends the level well to multiple replays. Passing through the sewer at any time has the chance of spawning nosalises from a myriad of places that can quickly kill the trainee if he is unprepared. One of these times that is most notable and inopportune, is when the trainee is trying to open the bulkhead door to the base. Occasionally when he calls for the door to be open via buzzer, the door will jam when trying to open, and cause a mass of nosalises to converge on the loud sounds, causing the trainee to be stuck in a rather small location with bloodthirsty and relentless beasts until the door can open.

Kshatriya is completed after the trainee ventures deep into the archives of the library, beyond the fearsome librarians within, and returns with the secret metro map. Below is a map and complete guide to finding every artifact in Kshatriya - remember that some are placed randomly, but the guides lists as many possible locations as have been found. There is also a video guide for an in-depth walkthrough. 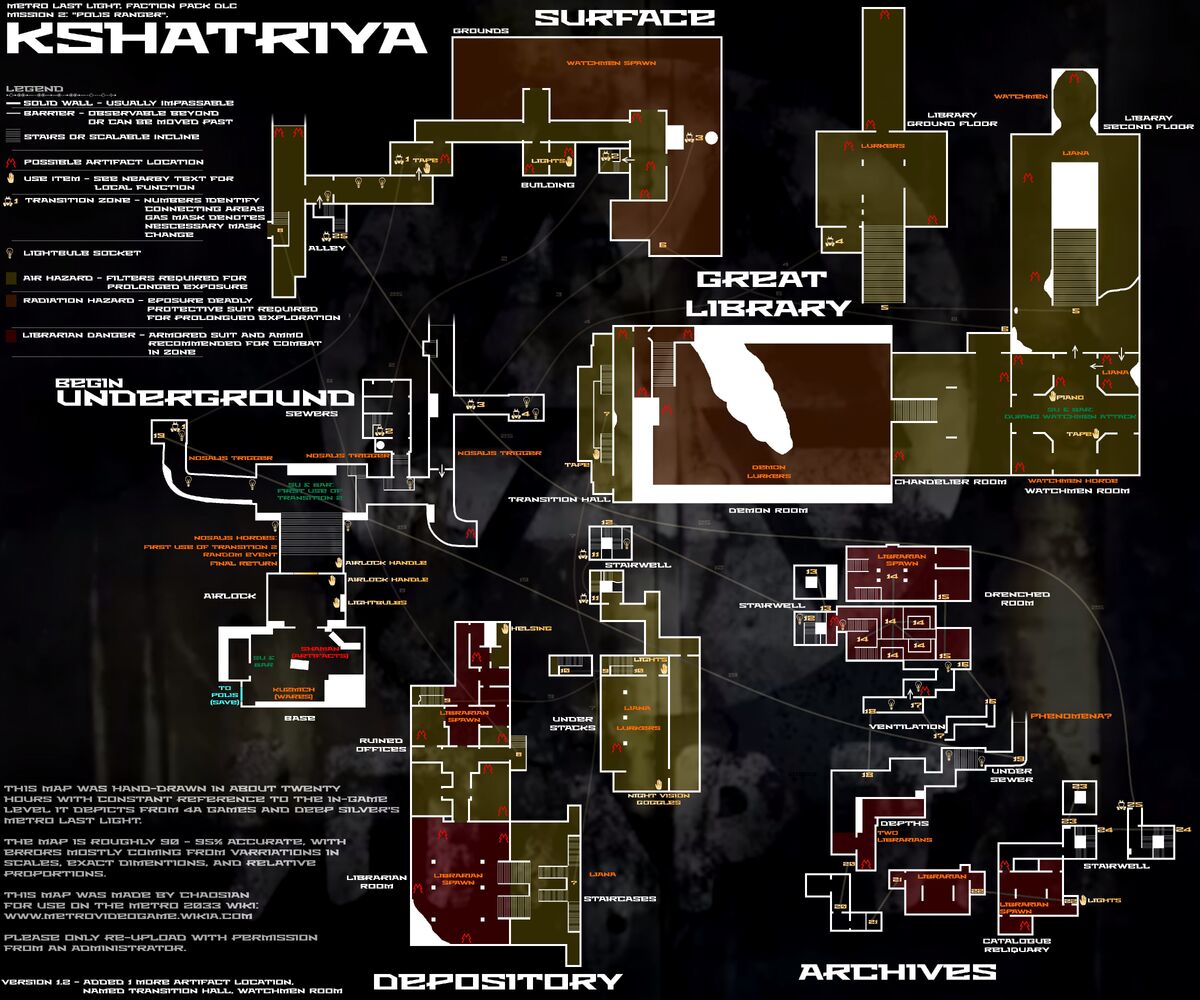 The trainee starts out with a Bastard carbine and an Ashot shotgun-pistol. The trader will offer to sell the following guns: Kalash, Duplet, Revolver, Lolife and Shambler. A Helsing can be found on a corpse of your predecessor. He will also offer incendiary shotgun shells, incendiary pistol rounds and regular assault rifle rounds, as well as throwing knives, claymore mines, sticky and incendiary grenades.

2 separate suits of armor are available for purchase, but only one can be worn at a time:

Night vision goggles can be found on a body of one of the trainee's predecessors.

All 30 Artifacts on Shaman's board.

A promotional image of Kshatriya. Curiously in daylight - even though the level is played in perpetual night.

A sticky grenade in the store.

Dragonbreath rounds in the store.

.44 AP Incendiary rounds in the store. 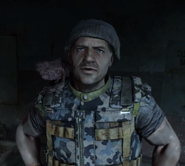