Leonid Maximovich Moskvin (Russian: Леонид Максимович Москвин) is a character in the Metro 2034 novel, who also makes an appearance in Metro: Last Light. He is the son of the Red Line's leader - Maxim Moskvin.

Leonid is depicted as a very handsome young man with an "angelic face and big green eyes". He's also cocky, charming, and a skilled talker. From his earliest years, Leonid was interested in music, art, and books, much to his father's dismay, who wanted nothing more than a ruthless successor. As a form of punishment  his father forced Leonid when he was a child to destroy a mosaic in order to show the boy that beauty is impermanent. Little did Comrade Moskvin know that Leonid memorized the pattern, thus not proving his son anything.

Evidently, all attempts to straighten out the young boy were in vain, so Leonid was "excommunicated and banished" from the family. From that day, having nothing more than flute and diplomatic passport, Leonid travels around the metro to instill beauty into metro inhabitants' hearts. Thanks to this and his performances, he never lacks cartridges.

After their first meeting, Homer is extremely wary of Leonid, believing that he's nothing more than a fraud who wants to steal Sasha from him. It's later revealed that there is a hint of truth in this as Leonid fell in love with Sasha. During the Rangers' assault on Tulska station he tries (and somehow succeeds) to calm an angry mob of infected people. Unfortunately, Leonid is shot in the stomach by stray bullet. His fate remains unknown as Homer doesn't find his body among the drowned corpses.

In Metro: Last Light, he frees Artyom from the torture room, stating how he's disgusted by his father´s attempts to beat information out of him. Leonid also mentions that he resents his father for murdering his own brother to take over power and notes he will probably end up like his uncle. 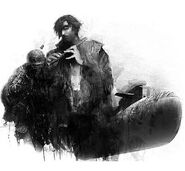