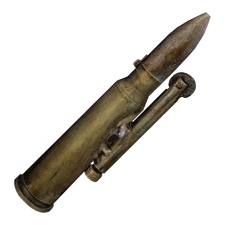 The Lighter is a modified 12.7mm bullet casing carried by Artyom through all three entries in the Metro Video Game Series.

The lighter and the notepad can be used to make the objectives notepad visible in dark areas and is also used to light the fuse of grenades. The lighter uses an unknown fuel source and, in turn, never seems to run out of fuel. It may also be used to illuminate small areas (however, it is visible to enemies); because the lighter illuminates Artyom, it isn't a good choice of equipment to pull out for stealth situations.

Artyom obtains the lighter, along with the notepad, in the first chapter of Metro 2033 and Metro: Last Light. Also, it's already part of his inventory at the beginning of Metro Exodus. Along with the lighter, the clipboard is an invaluable tool that will help guide Artyom all the way to the end of each game - as the compass on the clip board will constantly point to the next location that the player has to go to. 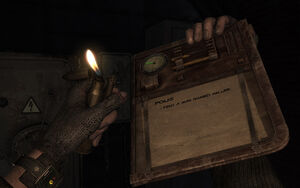 In Metro: Last Light, the lighter has a greater number of uses, and can be utilized to the advantage of players much more often. For one, it's the primary tool to burn through the cobwebs that otherwise slow Artyom down. It can obviously be used to light areas if torches are nearby, which is especially useful in areas of the darkness that render Flashlight and Nightvision goggles useless. In addition to the use of compass of Artyom's clipboard, the smoke of the lighter will also always drift in the direction of the nearest objective - giving more immersive, yet less concrete directions to proceed next to. Although the Lighter itself is not enough to scare the spiderbugs off, the player can use it to light up the flammable objects to create a safezone quickly.

In Metro: Last Light, Artyom can equip a weapon and the lighter at the same time, but at the cost of accuracy. This can be remedied by attaching a Laser sight on a weapon. Such a process can be useful for burning cobwebs while defending himself, as in the case of when fighting Spiderbugs, though Artyom will un-equip the lighter if he aims down the sights, begins to run, or reloads.

In Metro Exodus, the lighter performs all the same functions as in Last Light, with the exception of acting as an objective marker. However, it has gained the ability to ward off Spiderbugs this time around, as well as being generally brighter and having a further reaching light. This makes the lighter far more useful as an actual light source in and of itself. 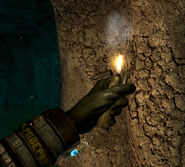 The lighter as seen in Metro Last Light Redux. 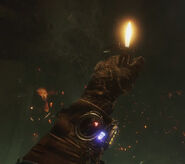 The lighter as it appears in Metro Exodus. 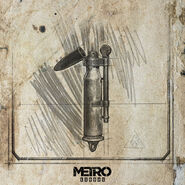 A picture from Artyom's Diary showing the Lighter.