The Lolife (Russian: Подонок) is a high caliber, semi-automatic (full auto with the appropriate attachment) pistol found only in Metro: Last Light. It is highly customizable, capable of performing well in a number of situations.

The Lolife is a metro-made semi-automatic handgun with a standard eight-round magazine chambered in .44 Magnum. As such, the Lolife trades the power of the .44 Magnum rounds normally used for the Revolver, for higher capacity and rate of fire. This generally makes what would be considered a more generous weapon in combat, allowing the missing of several shots to go by with little reprimand. It should be noted though that the Lolife's higher rate of fire results in a quicker ammo loss in prolonged firefights, and thus, it is a more expensive weapon to buy ammo for than the revolver. The magazine is mounted in front of the trigger group and it is capable of semi or fully automatic fire with the appropriate modifications.

The Lolife is commonly found with a couple of attachments when dropped by enemies, with the stock being the most common. Due to its all-around good stats, and ability to be widely customized, it is popular among many Metro-dwellers such as guards and criminals. It can also be found on many corpses in the game world.

As the Lolife is a metro-made weapon, it has very little known history. It appears that Lolife has been produced since at least 2023, though not seen in the first installment of the Metro series, indicated by the pistol's popularity in the second game. The markings on the frame say "VANO & PROF LTD. PISTOL SELF-LOADING ПАДОНОК. 2023".

What could be ascertained would mostly be speculation as to the weapon that the Lolife was based on. The weapon shares several similarities to a few real-life firearms. Above all perhaps, the Lolife design seems to have been heavily inspired by the 1897 Bergmann No5 pistol which is very similar in appearance and also has the capability to mount a detachable stock.

The Lolife has the most attachments available of any weapon in the game. It has 3 Optics, 3 Barrel upgrades and 4 Misc upgrades. Fully upgrading the weapon turns it from a semi-automatic pistol into a fully-automatic submachine gun with increased ammo capacity, range and accuracy compared to the stock version. 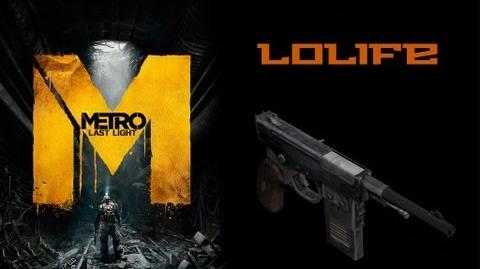 The extended magazine upgrade is not available in stores until the player reaches the Ranger base in the level "Undercity". However, It can be first encountered on many enemies in the level "Bandits". Similarly, the autofire adapter cannot be purchased until the player reaches the merchant at the end of "Contagion". Again though it's possible to acquire one for free several levels earlier on the "Sundown" mission. If the player heads to the area where the watchtower overlooks a small compound (straight ahead at the start of the mission), there is a row of small garages, one with a car blocking the door. If you look carefully, however, by crouching you can enter the building where a Lolife with an extended barrel, stock, extended magazine, autofire adapter, and laser sights is propped up against the far wall. This also counts as one of the ranger stashes towards the Equipped achievement/trophy. The autofire adapter is available in DLC mission stores and the Lolife in the "Sniper Team" level already has it equipped, essentially making it a miniature submachine gun.

The Lolife's main competition is the Revolver and Ashot. Still, a Lolife's primary advantage is its ease of use, versatile in many situations, firepower, and the wide range of attachments. However, this weapon will cost a lot of MGRs if you want to customize it. Also, you will need to scavenge for .44 Magnum rounds more often because it's easy to chew through ammo quickly. The Lolife itself is rarer and more expensive than the Revolver and Ashot. If automatic weapons are a preference, this is the weapon of choice as the sidearm. If you want to save some MGR, stick to the revolver. If you are really lacking in MGRs and cannot afford a decent shotgun, go with the Ashot.

Modified Lolife with a stock, longer barrel and a red dot sight