The Lost Catacombs is a short level in which Artyom and Bourbon escape the nosalises trailing after them from the bridge.

The place that they escape to is a graveyard with bodies and the things that await them there may be worse than nosalises. After a strange supernatural door attempts to kill them, a dark one reaches through the door and saves them. The journey remaining to Market Station is a short one but still overshadowed by the lurking nosalises. Bourbon eventually leads Artyom to the door of Market Station. As the trailing nosalises finally reach the duo, Hansa's armored railed car begins to mobilize. As the last nosalises are fended off, the guards turn their weapons towards Bourbon and Artyom as it becomes apparent that Bourbon has racked up debt with them in the past. Artyom and Bourbon are eventually guided by the light and safety of Hansa, albeit at gunpoint. 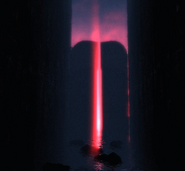 The nosalises evaded, for now.

The nosalises attack at Market's gate.

Hansa comes to save the day.

Concept work of the pit near Market Station by Oleg Gamov
Deutsch Русский
Community content is available under CC-BY-SA unless otherwise noted.
Advertisement