Lurkers (Russian: singular Кикимора) are a pack-based species of burrowing mutants in the Metro universe.

Lurkers are comparably small creatures that are on the lower ends of post-appocalyptic food chain. They are very fast, with a tendency to jump up from holes in the ground and launch themselves at threats or food. They often show up in packs of one to three at a time, even if more are in the area. Lurkers are mostly scavengers that press in upon carcasses, and rarely hunt live prey. They have almost pink skin and no body hair whatsoever. They also possess a second pair of eyes, which are very small and probably useless as they appear to be milky white (a sign of blindness).

Lurkers congregate in recently abandoned metro stations, feeding on the corpses of humans and mutants alike. They have warrens, burrows that allow the lurkers to transit between holes as a means of flanking prey. The holes that they use are often (if not always) above lower rooms of the stations, indicating that their burrowing abilities are not very good and that they prefer to use large, empty spaces to save them the trouble of digging a new warren.

Lurkers tend to only attack lone humans as opposed to large groups, another behavioral trait of scavengers, such as when Artyom is making his way through Hole Station and carrying Sasha. Bourbon warns Artyom of this early in the game when a lone lurker is seen fleeing before them.

The lurkers of Metro: Last Light look completely different than their counterparts in Metro 2033. They have light brownish tan skin, a short neck with a pronounced droop, and a head that resembles a cross between a reptile's and an insect's with very small, beady eyes. This dramatic change may simply be attributed to artistic license, but it could imply that the name lurker is just a catch-all term for a number of mutant species, many of which may be related to watchers.

Metro Exodus features a redesigned lurker. This variant has the appearance of a hunchbacked, very large, simian-esque rat. The lurker's body is covered in pink skin and mangy black fur that seems to be balding heavily around the head and chest areas.

It has large back paws twice the size of its front paws, and possesses opposable thumbs. The large back paws are possibly an adaptation that helps in the digging of tunnels. These variants also appear to be much more aggressive and are prone to attack, even when unprovoked. 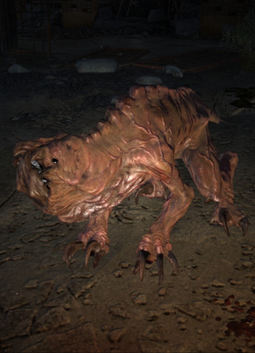 Dealing with lurkers depends on how they are approached. While individual lurkers can cause severe damage, they frequently attack in groups at a time. After striking or missing contact, they will retreat into their holes. Caution is advised, however, as they can come out of the holes behind Artyom at any time.

Moving into lurker territory with guns blazing is not recommended. Instead, trying to find a spot where there are no holes behind, like a solid corner or structure with one entrance, will guarantee a better chance of survival. If Artyom moves into the middle of their territory, he will provoke them, if this happens, retreat to a safe spot. Doing this will force them to run squarely into the barrel of a revolver (or any other weapon), which can dispatch any lurker with one shot to the head (an easy shot to make when they are running straight at Artyom). Shotguns are also a good choice, but only at Hardcore or Ranger difficulties where its stopping power is large enough so that Artyom can take them out at longer distances. Like most melee enemies, however, they tend to jump when they are close. That means Artyom may pull the trigger just as they are flying over his line of fire.

It should be noted that lurkers are the only mutants that are actually more dangerous in Ranger pack difficulties. Their normally modest damage is made much higher, and their mobility is their defense, so increased damage of Artyom's weaponry will not help as much. Because they attack fast and in groups, Artyom can be shredded in a matter of seconds.

Similar tactics as used against librarians can be used against lurkers, as they usually do not come out of their holes if the player character looks at them, and tend to attack from the opposite direction. They often retreat if the player character spots them while trying to sneak up from behind. This could be very useful when playing in ranger difficulties as they are much more powerful. It's advised to not rely completely on this, however, as they might still come out and attack.

When dealing with lurkers in the area requiring a gas mask in "Defense", it's best to provoke them and then retreat to an area with no gas (like at the top of the stairs). Otherwise, they might seriously damage the player character's mask.

Lurkers will rarely appear out from a burrow the player character is staring at, instead, milling about beneath, waiting for them to look away, given away by the sounds of their movement and growls. A stick of dynamite down the warren (provided it doesn't fall too far down) will kill any lurkers nearby.

As a final note, there are no places in the game where lurkers spawn indefinitely. Even in the first area of "Child", they will eventually stop spawning (Artyom will need to kill somewhere in between 20 and 40 of them, however).

Lurker as seen in Metro 2033, standing as a howler does.

Lurker in the Theatre Station as seen in Metro: Last Light.

Lurker in the Theatre Station as seen in Metro: Last Light. 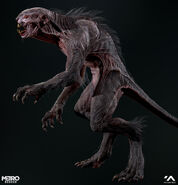 Full body shot of a lurker; by Maryna Chemerys
Русский
Community content is available under CC-BY-SA unless otherwise noted.
Advertisement