Moskvin has other uses. Please see Moskvin (Disambiguation) for other meanings.

Leader of the Red Line

Maxim Petrovich Moskvin (Russian: Максим Петрович Москвин) is General Secretary of the Central Committee of Red Line's ruling party, essentially the leader of the Stalinist faction. During the events of Metro: Last Light he is a minor antagonist, largely overshadowed by his supposed subordinate - General Korbut.

Moskvin was born well before World War III, possibly as far back as the 1970s, as he looks roughly 60 years old. Although nothing is comfirmed, he was likely a member of the Red Army, before the collapse of the USSR in 1991, though it is unknown whether he was a high ranking member. Like thousands others, he sought shelter inside the Metro when the bombs fell. He was likely still a member of the army at this time, so possibly was a part of Central Metro Command before its collapse. What is clear, however, is that he joined the faction that became the Red Line, with his brother, Andrey, about whom even less is known, as the leader.

At this point, there are two versions of the events - the original Beta Version (see below), and the current Metro: Last Light version. In both cases, Moskvin disposes of his brother and usurps his position as leader of the Red Line, though the method and outcome vary slightly. It can be presumed the Last Light version is now canonical.

In Metro: Last Light, Moskvin's right hand man and Head of Intelligence, Czeslav Korbut, 'informed' Moskvin that his brother, Andrey, was planning to murder him in order to cement his position as leader of the Red Line - this was a lie created by Korbut, but Moskvin believed him, and hatched a plan to assassinate his brother first. Inviting him to drinks, Moskvin poisoned his brother and took over as the leader of the Red Line. But not long after, Korbut approached him, stating that he was the only one who knew Moskvin's secret, and that he wanted more power or the secret would get out - Moskvin relented and Korbut became the de-facto ruler of the Red Line, ruling through Moskvin. Moskvin, however, became depressed, turning to drinking over the guilt of his brother's murder, but he knew Korbut had a stranglehold over him.

During the events of Metro: Last Light, Moskvin is first encountered by Artyom after his capture - whilst being interrogated by Korbut, Moskvin bursts in and demands that Artyom gives them Ranger information. Artyom refuses, so Moskvin orders Korbut to use 'Soviet-methods' of interrogation - his son, Leonid, comes in and is angry that Moskvin is being brutal. Arguing with him, Leonid runs out under a barrage of curses from Moskvin, who promptly leaves. Before Artyom can be executed by the Reds, Leonid returns and sets him free, wishing he could join him. Whilst escaping the Red Line, Artyom overhears a conversation between Moskvin and Korbut - Korbut tells Moskvin he has a way of capturing D6 for the Red Line, but needs the Politburo's (the council of the Red Line) permission. Korbut persuades Moskvin to demand the Politburo agree, much to Moskvin's displeasure.

Shortly before Korbut's plans are instigated, he tells Moskvin to attend the Polis Peace Conference to make it look as if the Red Line want peace, as well as drawing away much of the Ranger's force. The plan fails, however, as the baby Dark One reads Moskvin's mind, telling the Rangers of Moskvin's murder of his brother, Korbut's blackmail and his attack on D6, giving them enough time to mount a defence. Moskvin leaves in disgrace, much to the annoyance of the other attendees, and is not heard from again. As Korbut was technically behind the plan, and Moskvin was an unwilling puppet, he may have not been tried for war crimes and allowed to continue ruling the Red Line, free from Korbut's corruption.

"He began his political career only because of his elder brother, who used to be a high-principled communist. Moskvin was constantly trying to best his brother, even though he did not believe one ounce of what he did. Moskvin used to be always jealous of his smart and talented brother, who was the favourite of their parents.

Once, during the elections at one of the stations, Moskvin was pitted against his brother, and although the latter won the ballot, he was found to be in possession of seriously compromising materials which eliminated his further political career. Moskvin's brother was sent away to a labor camp where his traces vanished. Moskvin won, and although he'd gained the power, he kept thinking he was not being treated seriously, he was not respected and not loved and that the people in his retinue know of his treachery..." 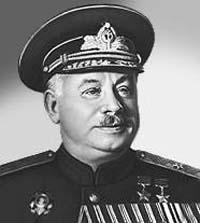 The Baby Dark One comforts Moskvin at the peace conference.