Medkits are first aid kits used throughout the metro. These consumables can be found almost everywhere, and are purchasable in all settlements.

Medkits are a package of syringes that permanently heal a considerable portion of Artyom's health, as well as increase his senses, speed, and heartbeat for a short period of time after each use. While such physical boosts make medkits an effective tool for mid-combat pauses, players are not advised to use them in pre-combat or post-combat situations, as the speed and vision boost given to Artyom by them is momentary at best - and Artyom will slowly heal damage on his own after time. As Artyom can only hold a total of five syringes, using them wisely and only when truly needed is recommended.

Medkits appear to be based on "Soviet civil defense" drug kits, and the instruction found on the lid further indicates that this is the military variant of the medkit: "Use in accordance with the orders of your commanding officer". Unlike most other pre-nuclear disaster equipment, medkits are rather common in the metro. The fact that the Metro-2 tunnels were likely built during the Cold War may explain the abundance of medkits. This could mean the medkits may have been kept in the Metro during construction, and explain why a decades-old piece of equipment is still abundant in the Metro.

The Medkit can be found almost anywhere: 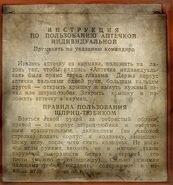 User manual found on the inner side of the lid

The medkit in real life

The medkit in Metro Exodus