The Medved (Russian: Медвед, a deliberate misspelling of the word meaning "bear") is a powerful Metro-made grenade launcher that can fire up to three contact detonated grenades in quick succession, making it ideal for taking out light armour or groups of soldiers.

The Medved was originally set to appear in the Metro: Last Light main campaign as an under-barrel attachment for the Kalash. However, it isn't included in the final campaign. It's featured in two of Last Light's DLCs, first seen in use by the Reich Heavy, Hans. This version has three barrels, unlike the underbarrel's single barrel. It consists of three pieces of pipe with a spring mechanism to launch grenades and a battery that created an electricity arc to light the fuse. The Medved has no proper sighting system or aim assist, so the player may have to experiment to determine the trajectory of the grenades.

No attachments are available for this weapon. This trait is shared with the flamethrower. 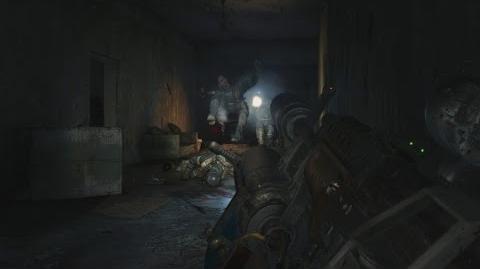 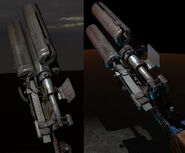 As would be included on a Kalash.

A Ranger using a Kalash with underbarrel Medved.

Promotional image of a soldier with a Medved.

The Medved in the Faction Pack, seen slung on Diesel's back.