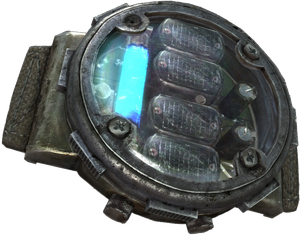 The watch is a useful item in the Metro Video Game Series, as it shows the amount of time until the gas mask's current filter runs out and must be replaced, and the level of cover and visibility (based on the amount of light the player is in).

Throughout the entirety of the games, Artyom always wears a watch on his left wrist.

Artyom's watch is used as a tool to measure how long the filter in his gas mask will provide function before clogging up. It also has three LED lights on it, one red, one yellow and one green. This is used to measure how visible Artyom is. Green means he is hidden, although enemies that are close will see him. Yellow means he is not well hidden and red means he is fully visible. When no light is displayed, he is completely hidden and will not be seen. It is especially useful in stealth situations when Artyom must hide from an enemy, but it's important to remember most enemies one would hide from have headlights or night vision goggles. Keep in mind that a stealth approach is rather useless when fighting mutants because they will smell Artyom, although in some encounters (such as in Caves) it is possible to sneak on a monster with its back turned, and if the mutant is sleeping the player will have a chance to sneak past it as long as you don't make any loud noise. Equipping stealth armor will help with all stealth related ventures, sometimes amply reducing the stealth level so much that the indication lights may not even show on Artyom's watch. 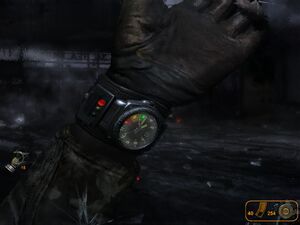 In Metro 2033, the watch can be brought up to the center of the screen regardless of what Artyom is holding in his hand (with the exception of turrets, cutscenes, etc.). Also, the watch display features three colors, which are connected to how much air-time Artyom has left in his current filter when using his gas mask. If the marker is in the green it means that the player has a sufficient amount time in the filters for most jobs, the player will have around 15 minutes until the next change. If the marker is in the yellow it means the player has several minutes of filter time and should be working their way to safety or trying to find another filter if they are on their last one. If the marker is in the red the player will need to move to safety quickly or they will have to change it/run out of filter time, which can be very problematic in levels such as Outpost.

In Metro: Last Light, Artyom's watch has changed significantly. Replacing the three lights system is now only one blue light that illuminates when Artyom is detectable. Furthermore, the display is made out of nixie tubes, with a countdown that tells the player how long Artyom's filter will last until it needs to be replaced. The watch can no longer be brought up to the middle of the screen but can be easily read while holding almost all weapons (note that the Saiga, VSV, or Shambler must not have any sight attachments for optimal visibility). The watch's countdown timer beeps at one minute left to alert the player to find filters.

Both Metro Redux games have the option of Spartan and Survival modes, in the style of Last Light and 2033 respectively. Besides the gameplay changes, these modes also change the watch you have; Spartan features the regular Last Light watch, while Survival has the old Metro 2033 watch, but updated with a blue LED light because of the new stealth mechanics. The feature of looking at your watch has been added to both games.

The nixie watch from Last Light returns in Metro Exodus, but this time it is part of a wholly customisable wristband. The watch has the same purpose in helping the player to keep track of how much time they have until the gas mask filter should be replaced, or giving us an idea of how well concealed we are from the sight of the enemies we encounter. 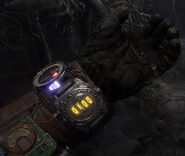